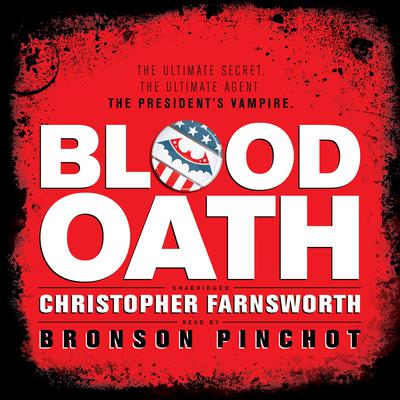 In 1867, two men went missing on a whaling vessel out of Boston Harbor. According to published reports, the ship's captain found another sailor standing over their corpses, drinking their blood. Tried for murder, the sailor was pardoned by President Andrew Johnson and died in an asylum for the criminally insane.

At least, that's the cover story.In fact, nineteen-year-old sailor Nathaniel Cade was turned into a vampire. His life was only spared to defend the United States against other "unnatural" threats. Bound in a blood oath by voodoo priestess Marie Laveau, Cade has spent over 140 years in service to the president. He is the ultimate secret agent—battling nightmares before they can break into the daylight world of the American dream.

Zach Barrows is an ambitious twenty-six-year-old White House staffer when his career takes an unexpected turn: he's assigned to be Cade's new handler and presidential liaison. Before Zach can get over the shock, he and Cade are sent to investigate a cargo shipment filled with the severed limbs of US soldiers. Zach learns that the world is far stranger—and far more dangerous—than he ever imagined. Their mission reveals the truth about the real Dr. Frankenstein, a shadowy conspiracy within the government, and a plot to attack the US with a gruesome biological weapon: an army of undying, unstoppable killers.

“Blood Oath is exactly how I like my Presidential thrillers. With vampires.” —Brad Meltzer, #1 New York Times bestselling author
“Witty, exciting, and compulsively readable, with a central character who seems destined to become a favorite of both skeptics and true blood believers, Blood Oath may just be the best debut vampire novel in many years.” —John Connolly, New York Times bestselling author
“Farnsworth makes it sinfully easy to turn the pages.” —Chicago Sun-Times
“[The] taut thriller Blood Oath is an irresistible page-turner…Farnsworth summons his talents as a scriptwriter and journalist to spin a complex and unnervingly realistic tale…The supernatural elements here are dazzlingly clever. With its labyrinthine plot and byzantine layers of government deceit, Blood Oath is a twenty-first-century riff on themes explored in such classics from America’s first Paranoid Age as The Manchurian Candidate and Invasion of the Body Snatchers. Cade is a wonderfully idiosyncratic character: a Christian renegade from the Vampire Nation who attends AA meetings to help him resist the lure of human blood. And as an added bonus, readers finally learn the truth behind the failed assassination attempt on Ronald Reagan and that mysterious 18 1/2 -minute gap in the Watergate tapes.” —Washington Post
“Blood Oath is the vampire novel that finally gets it right. Christopher Farnsworth has done his homework in places where most writers wouldn’t even know to look—and the result is a rollicking tale of the supernatural grounded in some of the true oddities of American history. If Dan Brown wrote a vampire thriller, this would be it.” —Mitch Horowitz, author of Occult America
“This action-filled debut by scriptwriter Farnsworth reads like a cross between P. N. Elrod’s historical vampire adventures and Thomas Greanias’ conspiracy thrillers…Entertainingly plausible historical documents at the beginning of each chapter and a sense that this fight is just a skirmish in a larger war help elevate the book.” —Publishers Weekly
“Farnsworth’s series debut asks the reader to set aside disbelief and buy into this premise, among other more fantastic concepts, and it’s almost easily done with his adept writing style. The galley’s back cover promises a hero that can out-Bauer Jack Bauer, and Nathaniel Cade does just that with his preternatural talents…A preposterous supernatural twist on Vince Flynn’s thrillers.” —Library Journal
“[A] rousing if ridiculous mash-up of spy stories and vampire vogue…Farnsworth does an admirable job of integrating his clichéd creation into American history and into a juicy techno-thriller story…The book, complete with clipped prose and wildly unbelievable action sequences, strongly recalls the supernatural thrillers of Matthew Reilly. Fun stuff…A paranormal thriller begging for a slot in airport bookshops.” —Kirkus Reviews

Christopher Farnsworth is a screenwriter and has now written the first three novels in the President’s Vampire series. He has worked as a staff writer, columnist, and investigative reporter, and his work has appeared in the New York Post, New Republic, and Washington Monthly. He has sold his first script, The Academy, to the MGM studio.