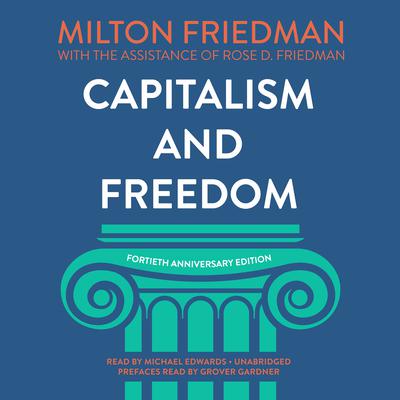 How can we benefit from the promise of government while avoiding the threat it poses to individual freedom? In this classic book, Milton Friedman provides the definitive statement of his immensely influential economic philosophy—one in which competitive capitalism serves as both a device for achieving economic freedom and a necessary condition for political freedom. The result is an accessible text that has sold well over half a million copies in English, has been translated into eighteen languages, and shows every sign of becoming more and more influential as time goes on.

This updated edition includes a new preface by the author.

“The most influential…economist since World War II.” —Washington Post
“Milton Friedman is one of the nation’s outstanding economists, distinguished for remarkable analytical powers and technical virtuosity. He is unfailingly enlightening, independent, courageous, penetrating, and above all, stimulating.” —Newsweek
“The economist of the century.” —Fortune
“Edwards is a straightforward narrator, and the essays lend themselves to reading aloud because they began as lectures.” —Talking Book Review

Milton Friedman (1912–2006) was perhaps the most influential economist of the twentieth century. Professor, columnist, author, and advisor, he was awarded the 1976 Nobel Prize in economic sciences.

Rose D. Friedman (1910–2009) was a professor at the University of Chicago Law School. She was the author, with her husband Milton Freidman, of two books on economics and public policy, Free to Choose and Tyranny of the Status Quo, as well as their memoir, Two Lucky People.