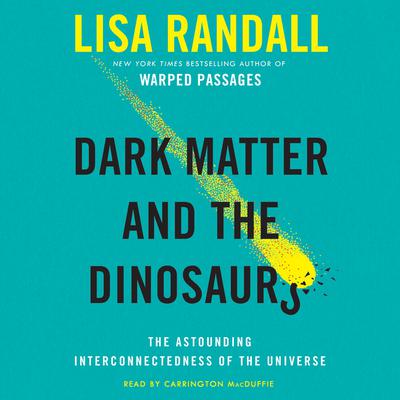 Dark Matter and the Dinosaurs: The Astounding Interconnectedness of the Universe

A Kirkus Reviews’ Best Books of 2015 for Nonfiction

In this brilliant exploration of our cosmic environment, the renowned particle physicist and New York Times bestselling author of Warped Passages and Knocking on Heaven’s Door uses her research into dark matter to illuminate the startling connections between the furthest reaches of space and life here on Earth.

Sixty-six million years ago, an object the size of a city descended from space to crash into Earth, creating a devastating cataclysm that killed off the dinosaurs, along with three-quarters of the other species on the planet. What was its origin? In Dark Matter and the Dinosaurs, Lisa Randall proposes it was a comet that was dislodged from its orbit as the Solar System passed through a disk of dark matter embedded in the Milky Way. In a sense, it might have been dark matter that killed the dinosaurs.

Working through the background and consequences of this proposal, Randall shares with us the latest findings—established and speculative—regarding the nature and role of dark matter and the origin of the Universe, our galaxy, our Solar System, and life, along with the process by which scientists explore new concepts. In Dark Matter and the Dinosaurs, Randall tells a breathtaking story that weaves together the cosmos’ history and our own, illuminating the deep relationships that are critical to our world and the astonishing beauty inherent in the most familiar things.

“A gripping page-turner that is impossible to put down.” —Augusten Burroughs, New York Times bestselling author
“Brings a fresh twist to one of the world’s oldest murder mysteries…[and] convincingly implicates a new suspect as ultimately responsible for the hit.” — Max Tegmark, New York Times bestselling author
“A cracking read, combining storytelling of the highest order with a trove of information.” —Wall Street Journal
“Successful science writing tells a complete story of the ‘how’—the methodical marvel building up to the ‘why’—and Randall does just that.” —New York Times Book Review
“A very enjoyable read for both lay readers and scientists.” —Science
“Written with dry wit and ice-cool clarity. A book anyone at all interested in science must read. Surely the science book of the year.” —Sunday Times (London)
“Startlingly honest [and] beautifully written…Randall’s calm authority and clarity of explanation are exemplary…Like being taken behind the curtain in Oz and given a full tour by the wizard.” —New Scientist magazine (UK)
“The greatest strength of Randall’s book is that it lacks any overly academic jargon and is reasonably easy to understand.” —Bust
“Randall covers a lot of ground, but does so smoothly even when addressing some of science’s most abstruse subjects. Hers is a fascinating, tantalizing theory, linking life on Earth—or the extinction thereof—with the very origins of our universe.” —Publishers Weekly (starred review)
“This acclaimed physicist argues that it was dark matter that nudged a comet earthward, so wiping out the dinosaurs sixty-six million years ago. As Randall unfolds the reasoning behind this bold speculation, she traverses an impressive range of science…Engrossing.” —Booklist (starred review)
“Writing in a deceptively chatty narrative style, Randall provides a fascinating window into the excitement of discovery and the rigor required to test and elaborate new hypotheses. A top-notch science book from a leading researcher.” —Kirkus Reviews (starred review)
“Narrator Carrington MacDuffie provides a straightforward narration, which is all this book requires…If you have any interest in the subject, this is as good an audio presentation as could possibly be done.” —AudioFile
“A provocative and revealing account of how scientists like [Randall] are uncovering deep connections between human existence and the wider universe. A terrific read.” —Timothy Ferris, Pultizer Prize nominee
“Intriguing, insightful…A simple, elegant theory that finally makes sense of mass extinctions. A must read for anyone interested in the precariousness of life on earth.” —Jack Horner, MacArthur fellow and author of How to Build a Dinosaur

Lisa Randall is a professor of physics at Harvard University. She is one of today’s most influential and highly cited theoretical physicists, and has received numerous awards and honors for her contributions. Her work has been featured in Time magazine, the New York Times, Rolling Stone, Esquire, Vogue, the Economist, Scientific American, and elsewhere. Randall is a member of the National Academy of Sciences, the American Philosophical Society, the American Academy of Arts and Sciences, and the American Physical Society, and is the recipient of several honorary degrees. When not solving the problems of the universe, she can be found rock climbing, skiing, or contributing to art-science connections. Hypermusic Prologue, a small opera for which she wrote the libretto, premiered in the Pompidou Center in 2009, and Measure for Measure, an art exhibit she co-curated, opened in Los Angeles in 2010.