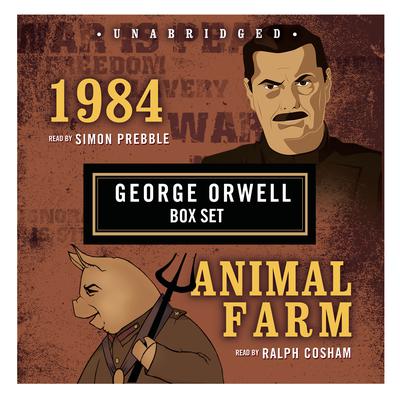 By George Orwell
Read by Simon Prebble and Ralph Cosham

This boxed set includes two of George Orwell’s most famous and beloved novels, 1984 and Animal Farm.

George Orwell depicts a gray, totalitarian world dominated by Big Brother and its vast network of agents, including the Thought Police, a world in which news is manufactured according to the authorities’ will and people live tepid lives by rote.

Winston Smith, the hero with no heroic qualities, longs only for truth and decency. But living in a social system in which privacy does not exist and where those with unorthodox ideas are brainwashed or put to death, he knows there is no hope for him. He knows even as he continues to pursue his forbidden love affair that eventually he will come to destruction.

The year 1984 has come and gone, yet George Orwell’s nightmare vision in 1949 of the world we were becoming is still the great modern classic of negative Utopia. It is a propehtic and haunting tale that exposes the worst crimes imaginable: the destruction of freedom and truth.

George Orwell’s classic satire of the Russian Revolution has become an intimate part of our contemporary culture, with its treatment of democratic, fascist, and socialist ideals through an animal fable. The animals of Mr. Jones’ Manor Farm are overworked, mistreated, and desperately seeking a reprieve. In their quest to create an idyllic society where justice and equality reign, the animals of Manor Farm revolt against their human rulers, establishing the democratic Animal Farm under the credo, “All Animals Are Created Equal.” Out of their cleverness, the pigs—Napoleon, Squealer, and Snowball—emerge as leaders of the new community. In a development of insidious familiarity, the pigs begin to assume ever greater amounts of power, while other animals, especially the faithful horse Boxer, assume more of the work. The climax of the story is the brutal betrayal of Boxer, when totalitarian rule is reestablished with the bloodstained postscript to the founding slogan: “But Some Animals Are More Equal than Others.”

This astonishing allegory, one of the most scathing satires in literary history, remains as fresh and relevant as the day it was published.

“A wise, compassionate, and illuminating fable of our times…The steadiness and lucidity of Orwell’s merciless wit are reminiscent of Anatole France and even of Swift.” —New York Times Book Review on Animal Farm
“A profound, terrifying, and wholly fascinating book…Orwell’s theory of power is developed brilliantly.” —New Yorker on 1984
“Absolutely first-rate...comparable to Voltaire and Swift.” —New Yorker on Animal Farm
“The novel endures for its chilling portrayal of the dangers of a post-truth surveillance state.” —O, The Oprah Magazine on 1984