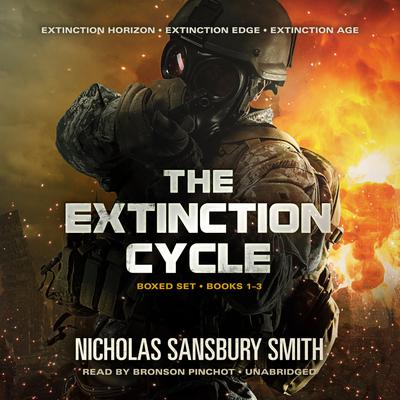 Here are the first three books of the bestselling, award-winning, and top-rated Extinction Cycle series.

The worst of nature and the worst of science will bring the human race to the brink of extinction.

After barely escaping with his life, Beckham returns to Fort Bragg in the midst of a new type of war. The virus is already spreading. As cities fall, Team Ghost is ordered to keep CDC virologist Dr. Kate Lovato alive long enough to find a cure. What she uncovers will change everything.

Total extinction is just on the horizon, but will the cure be worse than the virus?

A new threat that will bring humanity to the edge of extinction.

The dust from Dr. Kate Lovato’s bioweapon has settled. Projections put death counts in the billions. Her weapon was supposed to be the endgame, but it turned a small percentage of those infected with the hemorrhage virus into something even worse.

Survivors call them Variants. Irreversible epigenetic changes have transformed them into predators unlike any the human race has ever seen. And they are evolving.

With the doomsday clock ticking, the fractured military plans Operation Liberty—a desperate mission designed to take back the cities and destroy the Variant threat. Master Sergeant Reed Beckham agrees to lead a strike team into New York City, but first he must return to Fort Bragg to search for the only family he has left.

At Plum Island, Kate discovers Central Command may have considerably underestimated the Variant population in New York. As Operation Liberty draws closer, Kate warns Beckham that Team Ghost won’t just face their deadliest adversary yet, they may be heading into a trap.

On the eve of extinction, all seems to be lost, but there is still one final hope.

Operation Liberty has failed. Humans are losing the war. With no other option, General Kennor decides to pull back the troops and give science a second chance.

Trapped in the extensive sewer system beneath New York, Master Sergeant Reed Beckham and the survivors of 1st Platoon must battle through the tunnels—where they make a grisly discovery in their attempt to escape.

At Plum Island, Dr. Kate Lovato is working on a new bioweapon to destroy the Variants. But when a derelict Navy destroyer crashes into the Connecticut shoreline, she is forced to deal with a nightmare she thought had ended.

Nicholas Sansbury Smith is the New York Times and USA Today bestselling author of the Hell Divers series, the Orbs series, the Trackers series, the Extinction Cycle series, the Sons of War series, and the new E-Day series. He worked for Iowa Homeland Security and Emergency Management in disaster mitigation before switching careers to focus on storytelling. When he isn’t writing or daydreaming about the apocalypse, he enjoys running, biking, spending time with his family, and traveling the world. He is an Ironman triathlete and lives in Iowa with his wife, daughter, and their dogs.