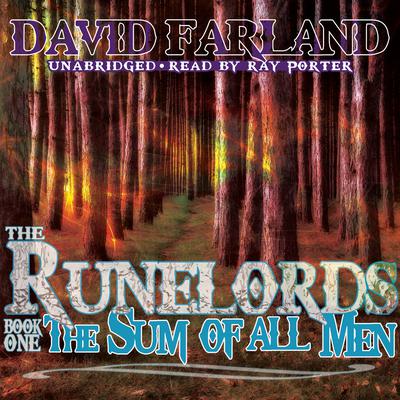 The Sum of All Men

David Farland’s acclaimed Runelords series introduces a world where the social structure is based upon the magical exchange of “endowments” such as stamina, grace, and wit. The Runelords are those who receive these endowments from their vassals, becoming superhuman in exchange for the responsibility of caring for those they have deprived of strength, or beauty, or sight.

Young Prince Gaborn of Mystarria is traveling in disguise on a journey to ask for the hand of the lovely Princess Iome of Sylvarresta. Armed with his gifts of strength and perception, the prince and his bodyguard stop at a local tavern, where they spot a pair of assassins who have their sights set on Princess Iome’s father. As they race to warn the king, they realize that more than the royal family is at risk—the very fate of the Earth is in jeopardy.

“Farland once again proves himself a wizard at storytelling…This latest is certain to summon past readers of the series back to bookstores.” —Publisher's Weekly
“Ray Porter keeps the battles fresh with a tone of wonder as the events unfold. He uses pace effectively to vary the intensity of the battles and to show the vulnerability and humanity of Gaborn and his allies. Porter narrates as a historian, with subtle clues to his biases and prejudices, but a general dedication to telling the story objectively.” —AudioFile
“The author’s inventive approach to magic and his skill at depicting complex, believable characters make this tale a good choice.” —Library Journal
“Farland gets a prospective series off to a dynamic start with a compelling, action-packed story set in an intricate created world in which magical powers are unusual and convincing.” —Booklist

David Farland is the pseudonym of Dave Wolverton, an American author of fantasy fiction who lives in Utah with his wife and five children. He was a budding author during his college years but came to prominence when he won the Writers of the Future L. Ron Hubbard Gold Award for On My Way to Paradise in 1987. He has achieved much renown in the science fiction field, but fans may know him best as the author of Star Wars novels; The Courtship of Princess Leia was met with acclaim from critics and readers alike and became a New York Times bestselling novel.