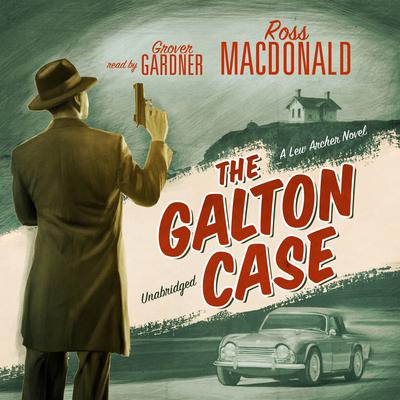 Winner of the AudioFile Earphones Award

Almost twenty years have passed since Anthony Galton disappeared, along with a suspiciously streetwise bride and several thousand dollars of his family’s fortune. Now Anthony’s aging and very rich mother wants him back and has hired Lew Archer to find him. What turns up is a headless skeleton, a boy who claims to be Galton’s son, and a con game whose stakes are so high that someone is still willing to kill for them.

In the character of Lew Archer, Ross Macdonald redefined the private eye as a roving conscience who walks the treacherous frontier between criminal guilt and human sin—and in so doing, gave the American crime novel a psychological depth and moral complexity that his predecessors had only hinted at. Deliciously devious and tersely poetic, The Galton Case displays Ross Macdonald at the pinnacle of his form.

“Exciting, beautifully plotted, and written with taste, perception and compassion.” —New York Times Book Review
“One of his best…The Macdonald depth of understanding and dispassionate charity come out well, and the story…is richly plotted.” —San Francisco Chronicle
“The character claiming to be the long-lost heir to the Galton fortune may be an actor, but he’s not in the same league with Grover Gardner; on the evidence here, few are. P. I. Lew Archer discovers that while ‘John Galton’ claims to have been raised in an orphanage in Ohio, he actually grew up in Canada. But listeners can make the same discovery from the very subtly Canadian way he pronounces the word ‘about.’ Even more fun, the fancy lawyer who hires Archer to find Galton speaks with the exact stagey faux-English accent that the likes of William Powell used in forties films noir; you can absolutely see his big-shouldered 1949 suit and his pencil mustache. Macdonald is at his best here; Gardner is even better. Winner of AudioFile Earphones Award.” —AudioFile
“A tightly written page-turner that also probes profound themes and frequently rises to something like poetry.” —Amazon.com
“A model of intelligently engineered excitement.” —New Yorker