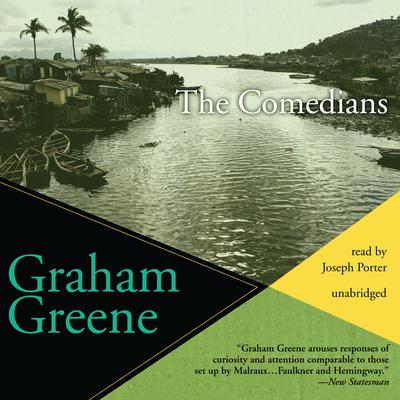 Three men meet on a ship bound for Haiti, where corruption and terror reign under the dictatorship of Papa Doc and the Tontons Macoute, his sinister secret police. Disillusioned and noncommittal, they are the “comedians” of Greene’s title. Brown is a disenchanted English hotel owner; the Smiths are an American couple on a good-will mission; Martha is the young wife of a Latin American diplomat; Jones is an engaging fool. They play their parts, respectable or shady, in the foreground, experiencing love affairs rather than love, enthusiasms but not a faith, and meaningless accidental deaths. Hiding behind their actors’ masks, they hesitate on the edge of life, afraid of love, pain, and fear itself. With alternating comedy, irony, and grim violence, Greene weaves these lives in a pattern of mounting suspense.

“One of Graham Greene’s most chilling and prophetic novels.” —Amazon.com editorial review
“Laughter is possible even in the dark night of Haiti…A vision that is at once comic and intensely serious…A major novel!” —Roger Sharrock, author of Saints, Sinners and Comedians
“Greene’ Comedians is eminently, expertly stylish. It may not be his most important book but a good many attractive adjectives apply.” —Kirkus Reviews (starred review)
“One of his best novels…The Haiti of The Comedians is grainy, visceral, forthright, and true.” —Chicago Tribune