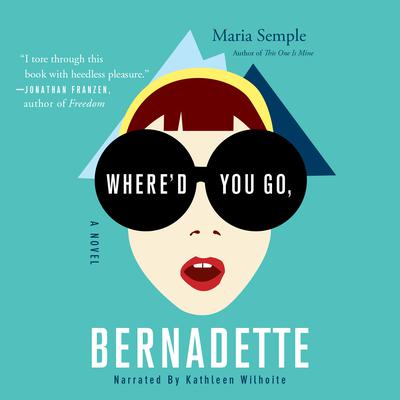 Where’d You Go, Bernadette: A Novel

Finalist for the 2013 Women's Prize for Fiction

A London Guardian Pick of 10 Runaway Mothers in Fiction

A 2012 eMusic Best Audiobook of the Year for Fiction

Winner of the 2013 YALSA Alex Award

Bernadette is a frightfully intelligent wife and mother whose intense allergy to Seattle specifically, and to people in general, has driven her to hire a virtual assistant in India to execute even her most basic tasks. Then her daughter, Bee, insists on a family trip to Antarctica as her reward for getting perfect grades in middle school, and Bernadette is faced with the daunting prospect of actual human interaction. The timing could not be worse. Worn down by years of dealing with Seattle's polite drivers, overzealous moms, and proximity to Idaho (and don't even get her started on Canada), Bernadette is already on the brink of a breakdown.

Throw in a feud with her neighbor over Bernadette's rampant blackberry bushes, the scandal that erupts when she runs over another mother's foot at the school's drop-off, and a class fundraiser that goes disastrously awry-and it is all too much. Bernadette vanishes, leaving her Microsoft-guru husband, a horde of angry parents, and questioning police officers to pick up the pieces. Desperate to find her mother, Bee probes her emails, invoices, school memos, private correspondence, and other evidence, conjuring out of those shards a portrait of a woman she never knew before-and a secret that could explain everything.

Where'd You Go, Bernadette is an ingenious and unabashedly entertaining novel about a family coming to terms with who they are. It is also a riotous satire of privilege and an unsentimental but powerful story of a daughter's unflinching love for her imperfect mother.

“Kathleen Wilhoite delivers an energetic narration of Maria Semple’s funny, often snide social commentary.” —AudioFile
“The characters in Where’d You Go, Bernadette may be in real emotional pain, but Semple has the wit and perspective and imagination to make their story hilarious. I tore through this book with heedless pleasure.” —Jonathan Franzen, New York Times bestselling author
“The funniest book since the invention of the printing press.” —Gary Shteyngart, New York Times bestselling author
“You don’t have to know Seattle to get Maria Semple’s broadly satirical novel…Underlying the nontraditional narrative are insights into the cost of thwarted creativity and the power of mother-daughter bonds, although a reader may be having too much fun to notice.” —O, The Oprah Magazine
“[A] divinely funny, many-faceted novel.” —New York Times
“Engrossing and whip-smart.” —Entertainment Weekly
“Cuts a wry slice of a life-one that’s populated by private-school helicopter parents, obsessively conscious neighbors, and green-juice swilling, TED-talking husbands—and one that’s sharp enough to make us feel slightly relieved about not having to live anywhere quite so bucolic.” —Vogue
“Utterly delightful…That rare good read that actually makes you feel good at the end.” —Christian Science Monitor
“A modern-day comic caper full of heart and ingenuity…As expected from a writer who has written episodes of Arrested Development, the nuances of mundane interactions are brilliantly captured, and the overarching mystery deepens with each page, until the thoroughly satisfying denouement.” —Publishers Weekly (starred review)
“Semple pokes fun at the Pacific Northwest as only a Seattleite can…Under the guise of a hilarious romp, Semple explores the universal questions of why we do what we do and love what we love to some sweet and unexpected ends.” —Booklist (starred review)
“A cleverly constructed Internet-age domestic comedy about a wife/mother/genius architect who goes a little nuts from living in that cesspool of perfection and bad weather called Seattle…Sharply witty.” —Kirkus Reviews

Maria Semple is the author of This One Is Mine, Today Will Be Different, and the New York Times bestseller Where’d You Go, Bernadette? Before turning to fiction, she wrote for Mad About You, Ellen, and Arrested Development. Her writing has appeared in the New Yorker.