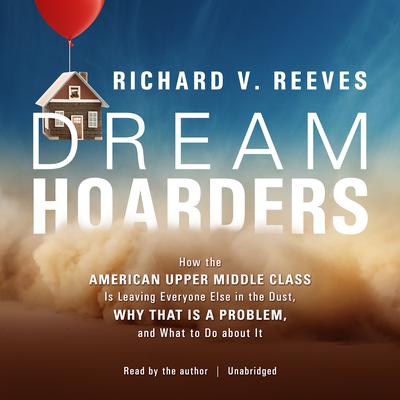 Dream Hoarders: How the American Upper Middle Class Is Leaving Everyone Else in the Dust, Why That Is a Problem, and What to Do about It

Shortlisted for the Stephan Russo Book Prize for Social Justice

America is becoming a class-based society.

It is now conventional to focus on the wealth of the top 1 percent—especially the top 0.01 percent—and how the ultrarich are concentrating income and prosperity, while incomes for most other Americans are stagnant. But the most important, consequential, and widening gap in American society is between the upper-middle class and everyone else.

Reeves defines the upper-middle class as those whose incomes are in the top 20 percent of American society. Income is not the only way to measure a society, but in a market economy it is crucial because access to money generally determines who gets the best-quality education, housing, health care, and other necessary goods and services.

As Reeves shows, the growing separation between the upper-middle class and everyone else can be seen in family structure, neighborhoods, attitudes, and lifestyle. Those at the top of the income ladder are becoming more effective at passing on their status to their children, reducing overall social mobility. The result is not just an economic divide but a fracturing of American society along class lines. Upper-middle-class children become upper-middle-class adults.

These trends matter because the separation and perpetuation of the upper-middle class corrode prospects for more progressive approaches to policy. Various forms of “opportunity hoarding” among the upper-middle class make it harder for others to rise to the top rung. Examples include zoning laws and schooling, occupational licensing, college application procedures, and the allocation of internships. Upper-middle-class opportunity hoarding, Reeves argues, results in a less competitive economy as well as a less open society.

Inequality is inevitable and can even be good, within limits. But Reeves argues that society can take effective action to reduce opportunity hoarding and thus promote broader opportunity. This fascinating book shows how American society has become the very class-defined society that earlier Americans rebelled against—and what can be done to restore a more equitable society.

“An important new perspective on equality and mobility from one of America’s best-informed and most articulate commentators on that topic. Reeves provocatively turns the current policy debate upside down—not ‘how do we increase upward mobility?’ but ‘how do we increase downward mobility?’ Certain to enliven dinner party conversations among America’s upper-middle class elite—so if you are in that group, this book is a must-read.” —Robert D. Putnam, Harvard University, author of Our Kids: The American Dream in Crisis
“We have met the enemy, and he is us: we who were smart enough to pick the right parents and now occupy the high ground in post-industrial America. Richard Reeves and I differ on specifics, but Dream Hoarders rightly gets to the heart of things: if we treasure America’s traditional civic culture and want to see it preserved for future generations, the upper middle class has to recognize how much responsibility it bears for the culture’s plight and act accordingly. He makes that case brilliantly.” —Charles Murray, American Enterprise Institute
“Dream Hoarders will shake you up, teach you a lot, and make you think much harder.” —E. J. Dionne Jr., New York Times bestselling author
“Recently, scholars and social activists have set off alarm bells about the rising concentration of income among the top 1 percent. Richard Reeves urges us to turn our attention to a wider slice of affluent Americans—the top fifth—and the result is a devastating empirical portrait of damage done to ‘the bottom eighty.’ This captivating and stirring book is likely to make many of its readers uncomfortable.” —Janet C. Gornick, professor of political science and sociology at the Graduate Center at the City University of New York and director of the Stone Center on Socio-Economic Inequality
“Tackles one of the most urgent—inequality and how to solve it—and comes up with serious answers.” —Guardian (London)
“Shows how millions of successful, hardworking Americans, often with the best of intentions, have helped build a society where birth matters more than brilliance. Impassioned, data-driven, and focused on practical solutions, Dream Hoarders is a fine cure for an age of stale, cynical politics.” —Economist (London)

Richard V. Reeves is a senior fellow in economic studies and codirector of the Center on Children and Families at the Brookings Institution in Washington, DC. Between 2010 and 2012, he was director of strategy to the deputy prime minister of the United Kingdom. He has also been the director of Demos, the London-based political think tank; the principal policy advisor to the minister for welfare reform; and a research fellow at the Institute for Public Policy Research, among other roles. He is a former European Business Speaker of the Year. A former journalist for the Guardian and Observer, he is a contributor to the Atlantic, National Affairs, Democracy Journal, the Wall Street Journal, and the New York Times. He earned a BA from Oxford and a PhD from Warwick University.