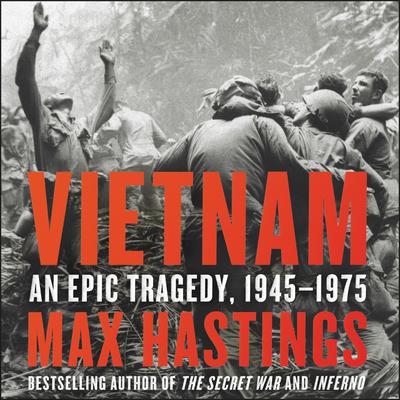 An absorbing and definitive modern history of the Vietnam War from the acclaimed New York Times bestselling author of The Secret War.

Vietnam became the Western world’s most divisive modern conflict, precipitating a battlefield humiliation for France in 1954, then a vastly greater one for the United States in 1975. Max Hastings has spent the past three years interviewing scores of participants on both sides, as well as researching a multitude of American and Vietnamese documents and memoirs, to create an epic narrative of an epic struggle. He portrays the set pieces of Dienbienphu, the 1968 Tet offensive, the air blitz of North Vietnam, and also much less familiar miniatures such as the bloodbath at Daido, where a US Marine battalion was almost wiped out, together with extraordinary recollections of Ho Chi Minh’s warriors. Here are the vivid realities of strife amid jungle and paddies that killed two million people.

Many writers treat the war as a US tragedy, yet Hastings sees it as overwhelmingly that of the Vietnamese people, of whom forty died for every American. US blunders and atrocities were matched by those committed by their enemies. While all the world has seen the image of a screaming, naked girl seared by napalm, it forgets countless eviscerations, beheadings, and murders carried out by the communists. The people of both former Vietnams paid a bitter price for the Northerners’ victory in privation and oppression. Here is testimony from Vietcong guerrillas, Southern paratroopers, Saigon bargirls, and Hanoi students alongside that of infantrymen from South Dakota, Marines from North Carolina, and Huey pilots from Arkansas.

No past volume has blended a political and military narrative of the entire conflict with heart-stopping personal experiences, in the fashion that Max Hastings’ readers know so well. The author suggests that neither side deserved to win this struggle with so many lessons for the twenty-first century about the misuse of military might to confront intractable political and cultural challenges. He marshals testimony from warlords and peasants, statesmen and soldiers, to create an extraordinary record.

“This balanced and insightful book is a pleasure to read. It destroys the fantasy that one side or the other held the moral high ground or a monopoly on devastating folly.” —Karl Marlantes, New York Times bestselling author
“Monumental.” —New York Times Book Review
“A characteristically brilliant, monumental work by Max Hastings that masterfully presents the political, cultural, military, and social factors that produced the most divisive and disastrous conflict in American history. Hastings synthesizes innumerable sources, including many from North Vietnam, that, in an unflinching, clear-eyed manner capture the brutality of both sides in this war, as well as the heroism and the ineptitude, the public confidence and the inner doubts that resulted in the tragedy that was Vietnam.” —General David Petraeus (US Army, ret.), former commander of coalition forces in Iraq and Afghanistan, commander of US Central Command, and director of the CIA
“Max Hastings’ meticulously researched, superbly written account will now become the standard by which all other histories of the Vietnam War are judged. He leaves no stone unturned in examining three decades of conflict from the vantage points of all combatants at all levels—from offices in Washington, Hanoi, and Saigon and conference tables in Geneva and Paris, to treacherous trips down the Ho Chi Minh Trail, savage fire-fights in jungles and rice paddies, and terror-inducing air attacks. The result is a work both eminently readable and definitive.” —Mark Clodfelter, National War College professor and author of The Limits of Air Power: The American Bombing of North Vietnam
“A product of Hastings’ prodigious research and his aptitude for pungent judgments. It is an unsparing look, by a warm friend of America, at the mountain of mendacities, political and military…Almost every Hastings page contains riveting facts.” —Houston Chronicle
“A gripping, well-researched look at a divisive American war.” —New York Post
“A highly readable and vivid narrative.” —NPR.org
“A work of considerable quality, marked by a possibly unique combination of military expertise, historical grasp, and journalistic skill in unearthing hitherto undiscovered human stories of the war…A very sad story and one that Hastings tells very well.” —Guardian (London)
“This is a comprehensive, spellbinding, surprisingly intimate, and altogether magnificent historical narrative.” —Tim O’Brien, author of Pulitzer Prize finalist The Things They Carried
“Will appeal to more than military and political history lovers; it may become one of the standard accounts of the war.” —Library Journal (starred review)
“[A] comprehensive, brilliant, and heartbreaking account…This isn’t an easy read, but it is an essential one to comprehend the totality of the wars in that long-besieged country.” —Booklist (starred review)
"[Hastings] brings his usual brilliant descriptive skills to the action, mixing individual anecdotes with big-picture considerations…Superb…A definitive history, gripping from start to finish but relentlessly disturbing.” —Kirkus Reviews (starred review)