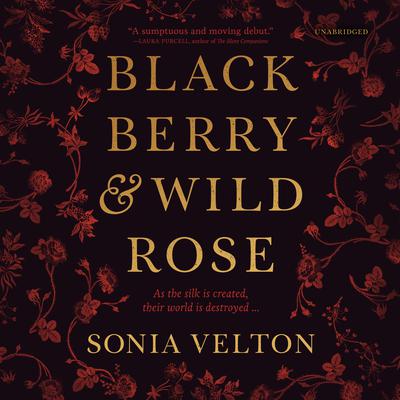 By Sonia Velton
Read by Esther Wane  and Shiromi Arserio

Set in eighteenth-century Spitalfields, London, Blackberry and Wild Rose is the rich and atmospheric tale of a household of Huguenot silk weavers as the pursuit of the perfect silk design leads them all into ambition, love, and betrayal.

When Esther Thorel, wife of a master silk weaver, rescues Sara Kemp from a brothel, she thinks she is doing God’s will, but her good deed is not returned. Sara quickly realizes that the Thorel household is built on hypocrisy and lies and soon tires of the drudgery of life as Esther’s new lady’s maid. As the two women’s relationship becomes increasingly fractious, Sara resolves to find out what it is that so preoccupies her mistress …

Esther has long yearned to be a silk designer. When her early watercolors are dismissed by her husband, Elias, as the daubs of a foolish girl, she continues her attempts in secret. It may have been that none of them would ever have become actual silks, were it not for the presence of the extraordinarily talented Bisby Lambert in the Thorel household. Brought in by Elias to weave his master piece on the Thorel’s loom in the attic of their house in Spitalfields, the strange cadence of the loom as Bisby works is like a siren call to Esther. The minute she first sets foot in the garret and sees Bisby Lambert at his loom marks the beginning of Blackberry and Wild Rose, the most exquisite silk design Spitalfields has ever seen, and the end of the Thorel household’s veneer of perfection.

As unrest among the journeyman silk weavers boils over into riot and rebellion, it leads to a devastating day of reckoning between Esther and Sara.

“With a richly detailed evocation of the era, including the shockingly grim life of the poor and the repression of women, this assured and multilayered historical novel weaves its own magical spell.” —Daily Mirror (London)
“The story is well written, and I empathized easily with the women concerned. I knew nothing about this period in our history and found it to be a totally fascinating read.” —Historical Novels Review
“A rich, rollicking read.” —Fabulous (UK)
“Listeners feel the streets of eighteenth-century Spitalfields, London, come alive through the stunning performances of narrators Esther Wane and Shiromi Arserio…Wane and Arserio bring the two characters to life, providing depth to the emotional content and making the listener recognize how much both Sara and Esther have to lose as they face difficulties and betrayal.” —AudioFile
“The fraught relationship between Sara and Esther is beautifully drawn, and fans of Jessie Burton’s The Miniaturist will thoroughly enjoy this engrossing, atmospheric tale of two women struggling for control of their own lives.” —Booklist
“Velton’s intriguing debut spotlights both the successes and hardships of Huguenot silk weavers in eighteenth-century England…Fans of Tracy Chevalier and Jennifer Chiaverini will be captivated by this story for its atmospheric, historically rich drama and forbidden romance.” —Library Journal
“An utterly absorbing novel that draws you into a fascinating and often sinister world. I loved it.” —Elly Griffiths, author of the Dr. Ruth Galloway Mysteries
“I absolutely loved it, and read it in one sitting, unable to put it down—the story was rich and compelling, the writing sensuous and sensitive. We were there with the silk weavers in Spitalfields, in the jacquard of their lives, their loves, their losses. A poignant and stunning debut.” —Mary Chamberlain, author of The Dressmaker of Dachau
“Velton’s debut is a masterfully plotted tapestry; a tangle of lives carefully pitted against each other and forming an intricate and spell-binding glimpse into the rich and volatile world of eighteenth-century silk weavers. I was captive from the first page to the last.” —Natasha Boyd, USA Today bestselling author of The Indigo Girl
“Sonia Velton’s debut novel Blackberry & Wild Rose transports readers to eighteenth-century London, climbing into the garrets of the Huguenot households in Spitalfields to weave a complicated tale of class, betrayal, and the turbulent silk industry. As richly textured as the fabric brought to life on the looms of the journeymen and masters, Velton examines the role of women as wives, whores, artisans, adversaries, and, ultimately, allies at a time when their voices were often silenced. A compelling read.” —Jean E. Pendziwol, bestselling author of The Lightkeeper’s Daughters
“Richly immersive, with a plot as finely detailed as Spitalfields silk.” —Stacey Halls, author of The Familiars
“Told in two distinct first-person voices, it is a glimpse into the world of the Spitalfields silk trade at a time when the working class was hard-pressed and a piece of silk was worth more than a man’s life. In Blackberry and Wild Rose, author Sonia Velton weaves a tale of secrets and yearning into a bittersweet but satisfying end.” —New York Journal of Books
“The story brings to life issues of woman empowerment, mothering, trauma, abuse, sex crimes, prostitution, human trafficking, social standing, forbidden love, dreams, desires, power, betrayal, upper vs. working class, conflict and so much more … all while being served up to you, neatly wrapped in a revolting patriarchal silver platter, but it also provides a view of redemptive power, faith and love and ultimately, acceptance. —The Book Babe

Sonia Velton has been a solicitor in Hong Kong, a Robert Schuman Scholar in Luxembourg, and spent eight years being a full-time mom of three in Dubai. She now lives in Kent. Her first novel, Blackberry and Wild Rose, tells the story of a fictional household of master silk weavers living in eighteenth-century Spitalfields. The protagonist is loosely inspired by Anna Maria Garthwaite who was the foremost silk designer of the mid-eighteenth century and the title takes its name from an actual silk design. The novel was short-listed as a work in progress for the Lucy Cavendish Fiction Prize 2015 and long-listed for the Myslexia Novel Competition.