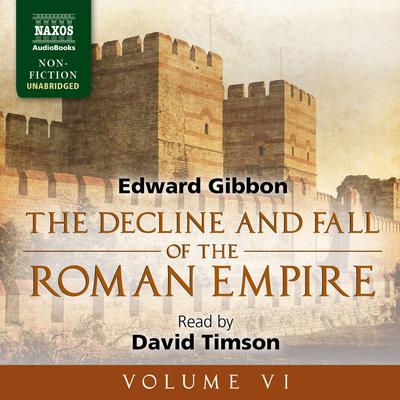 The Decline and Fall of the Roman Empire, Volume VI

The Decline and Fall of the Roman Empire has always maintained its initial appeal to both the general public and scholars alike. Its sheer scale is daunting, encompassing over a millennium of history covering not merely the Western Empire from the days of the early emperors to its extinction in AD 476, but also the Eastern Empire, which lasted for another thousand years until the Turks vanquished it in 1453. But Gibbon’s style, part historical fact and part literature, is enticing. The sheer honesty of the man, who endeavors to be scrupulously impartial in his presentation, endears him to the reader.

In this recording, David Timson incorporates the most salient of Gibbon’s footnotes. In Volume VI (Chapters LVII - LXXI), Gibbon ends his masterful history by charting the rise of the Turkish nation and the birth of the Ottoman Empire, which becomes an unstoppable force as it eventually captures the remains of the Eastern Empire. Weakened under the continuing schism of the Greek and Latin Christians, the strategically important site of Constantinople becomes an easy target for Sultan Mohammed II—much to the consternation and apathy of the West.