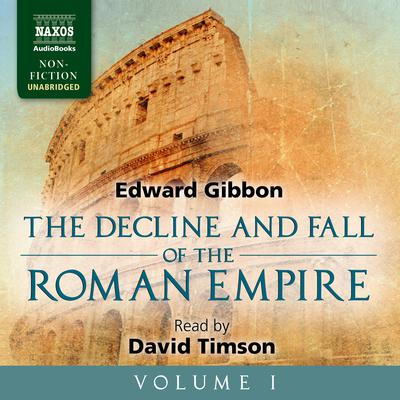 The Decline and Fall of the Roman Empire, Volume I

The Decline and Fall of the Roman Empire has always maintained its appeal to both the general public and scholars. Its sheer scale is daunting, encompassing over a millennium of history, covering not merely the Western Empire from the days of the early emperors to its extinction in AD 476 but also the Eastern Empire, which lasted for another thousand years until the Turks vanquished it in 1453. But Gibbon’s style, part historical fact and part literature, is enticing, and the sheer honesty of the man, who endeavours to be scrupulously impartial in his presentation, endears him to the reader.

In this recording, David Timson incorporates the most salient of Gibbon’s footnotes. In volume one (chapters IXV), Gibbon opens by setting the scene with the Empire as it stood in the time of Augustus (d. AD 14) before praising the time of the Antonines. The death of Marcus Aurelius and the accession of Commodus and his successors ushers in turbulent and dangerous times that were only occasionally marked by a wise and temperate ruler. The volume ends in AD 324, with Constantine the Great becoming undisputed Roman emperor, uniting both the Eastern and Western Empires.