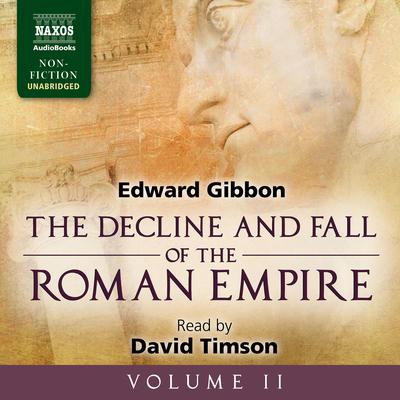 The Decline and Fall of the Roman Empire, Volume II

The Decline and Fall of the Roman Empire has always maintained its appeal to both the general public and scholars. Its sheer scale is daunting, encompassing over a millennium of history, covering not merely the Western Empire from the days of the early emperors to its extinction in AD 476 but also the Eastern Empire, which lasted for another thousand years, until the Turks vanquished it in 1453. But Gibbon’s style, part historical fact and part literature, is enticing, and the sheer honesty of the man, who endeavours to be scrupulously impartial in his presentation, endears him to the reader.

In this recording, David Timson incorporates the most salient of Gibbon’s footnotes. In volume two (Chapters XVI–XXVI), Gibbon continues his powerful history of the Empire, shining the spotlight on some of the best-known figures and their impact on the growing influence of Christianity, including Nero and, three centuries later, Constantine, whose establishment of Constantinople resulted in the division of the Empire into East and West. Gibbon also presents a sympathetic portrait of Julian, whose wisdom, courage, and clarity bore the hallmarks of the great emperor that Rome needed.