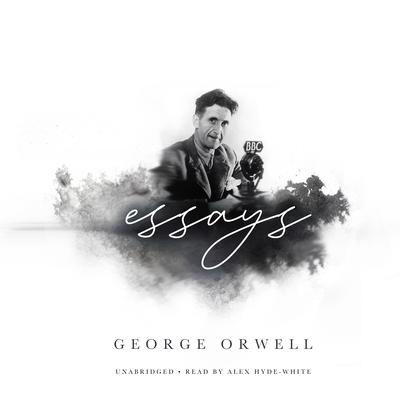 The articles collected in George Orwell’s Essays illuminate the life and work of one of the most individual writers of this century—a man who elevated political writing to an art. This outstanding collection brings together Orwell’s longer, major essays and a fine selection of shorter pieces that includes “My Country Right or Left,” “Decline of the English Murder,” “Shooting an Elephant,” and “A Hanging.”

With great originality and wit, Orwell unfolds his views on subjects ranging from a revaluation of Charles Dickens to the nature of Socialism, from a comic yet profound discussion of naughty seaside postcards to a spirited defense of English cooking. Displaying an almost unrivalled mastery of English plain prose, Orwell’s essays created a unique literary manner from the process of thinking aloud and continue to challenge, move, and entertain.

“This wonderful collection of essays is greatly enhanced by Alex Hyde–White’s attentive narration…Throughout this collection, Hyde–White’s narration maintains consistency as he captures the author’s tone and intonation. When Orwell includes dialogue, Hyde–White smoothly shifts into character…Throughout his reading, Hyde–White expertly guides the listener through Orwell’s fascinating ideas.” —AudioFile
“Orwell is the most influential political writer of the twentieth century…He gives us a gritty, personal example of how to engage as a writer in politics.” —New York Review of Books
“[Orwell] evolved, in his seemingly offhand way, the clearest and most compelling English prose style this century…But of course he was more than just a great writer. We need him today because [of] his passion for the truth.” — Sunday Times (London)
“The real reason we read Orwell is because his own fault-line, his fundamental schism, his hybridity, left him exceptionally sensitive to the fissure–which is everywhere apparent–between what ought to be the case and what actually is the case. He says the unsayable.” —Financial TImes (London)