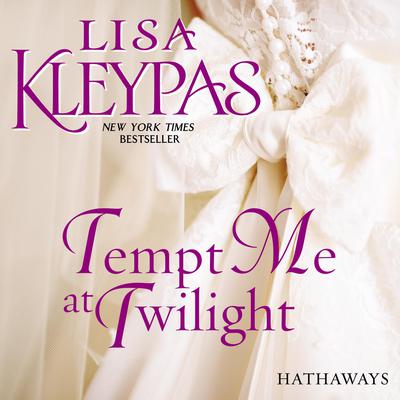 Tempt Me at Twilight: A Novel

Though she adores her quirky family, Poppy longs for a conventional life. But nothing, especially love, is ordinary when you’re a Hathaway . . .

During a stay at the magnificent Rutledge Hotel in London, effervescent Poppy Hathaway captures the attention of Harry Rutledge himself. With his brilliant mind and ruthless nature, Harry does whatever it takes to get what he wants. Fascinated by Poppy’s sweetness and charm, he comes up with a devious plot to steal her from another man and marry her himself.

At first, Poppy is charmed by the handsome genius, who rescues her from scandal with an offer of marriage. But when she discovers how her new husband betrayed her, Poppy flees the marriage.

Now it’s up to Harry to prove he can change his ways. Only by opening his heart, and loving Poppy with all the tenderness he’s capable of, will he convince her to give him another chance. And despite Poppy’s reluctance to forgive him, she realizes her shrewd, sexy husband may just turn out to be the man of her dreams.

Lisa Kleypas is the New York Times bestselling and award-winninng author of historical romance novels and contemporary women’s fiction. She graduated from Wellesley College with a political science degree.