A Pop Sugar Pick of Best New Books of the Month

A Bustle Pick of Most Anticipated Books of Summer

Akiko “Jane” Thompson, a half-Japanese, half-Caucasian woman in her midthirties, is attempting to forge a quietly happy life in the Bay Area with her fiancé, Shiro. But after a bizarre car accident, things begin to unravel. An intruder ransacks their apartment but takes nothing, leaving behind only cryptic traces of his or her presence. Shiro, obsessed with government surveillance, risks their security in a plot to expose the misdeeds of his employer, the TSA. Jane’s mother has seemingly disappeared, her existence only apparent online. Jane wants to ignore these worrisome disturbances until a cry from the past robs her of all peace, forcing her to uncover a long-buried family secret.

As Jane searches for her mother, she confronts her family’s fraught history in America. She learns how they survived the incarceration of Japanese Americans, and how fear and humiliation can drive a person to commit desperate acts.

In melodic and suspenseful prose, Guthrie leads the reader to and from the past, through an unreliable present, and, inescapably, toward a shocking revelation. Block Seventeen, at times charming and light, at others disturbing and disorienting, explores how fear of the “other” continues to shape our supposedly more enlightened times.

“At this darkly divisive moment in our republic’s history, Block Seventeen stands as a manifestly timely work that addresses historical trauma, the fragile nature of identity, the folds of history and memory’s fissures. It is replete with surprises, sudden turns, and multiple voices while unblinkingly dramatizing the profound and enduring, intergenerational psychic scars left by the World War II Japanese American internment experience. Yet the novel is not without a knowing, redemptive humor as its characters attempt to find and define themselves not only in the unstable space between two cultures, but in the shifting terrain between past, present, and an unforeseeable future. Its quiet urgency speaks to us all.” —Michael Palmer, author of The Laughter of the Sphinx
“Compelling…A twenty-first-century ghost story offers chills in this…promising debut.” —Kirkus Reviews
“The reader is taken back and forth in time in an absorbing…narrative that is purposeful in its examination of how we seem to be reliving past horrors, speeding back down the same road, this time on the high-octane fuel of technology. This promising and totally immersive debut, rich in Japanese American culture, is as devastating and evocative as Julie Otsuka’s When the Emperor Was Divine, with a Hitchcockian overlay of suspense.” —Booklist
“A layered mystery shrouded in grief, paranoia, and intergenerational trauma, set in the Bay Area but located in the half-hidden histories of many of its residents who lived through the Japanese American internment camps of the not-so-distant past.” —Thi Bui, author of The Best We Could Do
“Kimiko Guthrie has written a breezy, accessible novel that manages to defy multiple genres. Block Seventeen is part love story, part supernatural ghost tale, part family history, and part political thriller, with nothing less than the Japanese internment in America during World War Two—and today’s treatment of immigrants—coursing through its haunted, beating heart.” —Susan Jane Gilman, New York Times bestselling author
“Block Seventeen grabbed me from the first page and held me in delightful suspension till the last. A young Japanese American woman’s current life collides with the unresolved ancestral pain of her foremothers in a swirl of mystery, current-day politics, profound love, and near-madness—all couched in gorgeous prose. Guthrie is an outstanding novelist that I hope we will hear from again soon.” —Sarah Shourd, author of A Sliver of Light and The Box
“In Block Seventeen, Kimiko Guthrie blends horrors both supernatural and all too real to create a moving portrait of family, love, and the myriad ways trauma can haunt us across generations. This is a beautiful book, one that will linger in the reader’s heart long after its final pages.” —Shaun Hamill, author of A Cosmology of Monsters
“Lightning has struck twice with Block Seventeen. With this profound and devastating look at generational trauma, Kimiko Guthrie has not only penned a stunning debut, but a vital work of speculative fiction.” —Cadwell Turnbull, author of The Lesson
“Block Seventeen is a moving, compelling novel about intergenerational trauma and a woman’s process of integrating the various known and mysterious threads of her identity. The narrator, Jane (birth name Akiko), is the daughter of a woman who spent part of her childhood in Japanese internment camps. As the story moves back and forth between the contemporary Bay Area and the camps of the 1940s, we come to understand the tragedies that are passed down through a family, even unarticulated, which shape and, often, contaminate the present. Each of the three women in the book—Jane, her mother, her grandmother—searches for ways to evade unbearable loss, each in her separate context. Kimiko Guthrie has written a book in which what seems like surrealism or even magical realism can be understood as the efforts of troubled souls to make sense of experiences that cannot be rationally explained; in light of what is gradually learned about Jane’s family history, these experiences reveal themselves to be fragments of a painful collective and personal legacy. Guthrie’s book is poetically written and psychologically astute. I loved it.” —Anita Barrows, PhD, poet, psychologist, and author of We Are the Hunger
“Great crimes are never forgotten, and the World War II internment of the Japanese Americans continues to cast a long shadow. Block Seventeen traces parallels between past and present with a story that is sobering, hopeful, and always beautifully written.” —David C. Fathi, director, ACLU National Prison Project 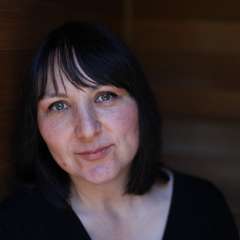 Kimiko Guthrie is the cofounder of Dandelion Dancetheater and a lecturer at Cal State East Bay. She holds an MFA in choreography from Mills College. She lives intergenerationally in the Bay Area with her husband, kids, and parents. Block Seventeen, which was inspired by her experience growing up with a mother who was incarcerated in a Japanese American internment camp, is her first novel.