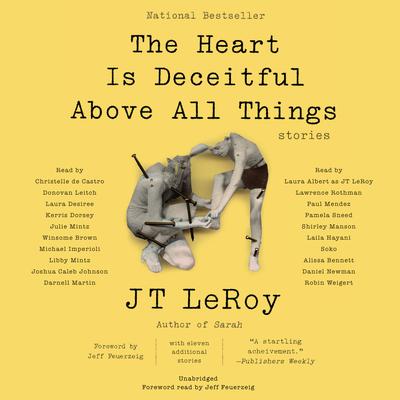 The Heart Is Deceitful Above All Things: Stories

A timely reissue of the extraordinary stories by JT LeRoy/Laura Albert that won international acclaim, to be timed with the theatrical release of the documentary Author: The JT LeRoy Story

This book of interconnected stories depicts the chaotic life of a young boy on the run with his teenage mother. When Sarah reclaims Jeremiah from his foster parents, he finds himself catapulted into her world of motels and truck stops, exposed to the abusive, exploitative men she encounters. As he learns to survive in this harrowing environment, Jeremiah also learns to love his mother, even as she descends into drug-fueled madness.

Told in spare, lyrical prose, rich with imagination and dark humor, The Heart Is Deceitful Above All Things transforms the savagery of Jeremiah’s world into an indelible experience of compassion. This special edition includes an additional seven stories, previously uncollected, by JT LeRoy, the literary persona of Laura Albert.

“A startling achievement.” —Publishers Weekly
“Remarkable.” —Booklist
“Strong, fierce, hard…Astonishing.” —Kirkus Reviews
“The Heart Is Deceitful Above All Things [has] grit, tragedy, and power. The force of the story continues to exist.” —Lit Hub
“An eyewitness’s imagination burns in his language, which is not lyrical but as vivid as a match held close to the face.” —New York Times

JT LeRoy is a literary persona created by Laura Albert. She is the author of Sarah, The Heart Is Deceitful above All Things, and Harold’s End.