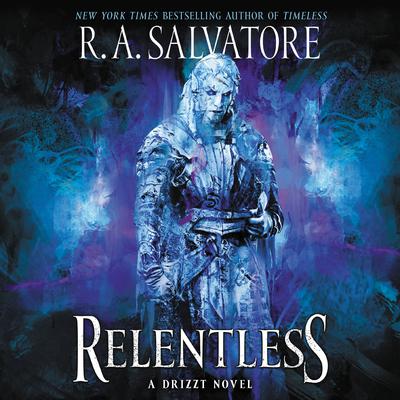 By R. A. Salvatore
Read by Victor Bevine

The epic conclusion to the long-awaited trilogy featuring one of the most beloved characters in all of fantasy―Drizzt Do’Urden―a rollicking tale of life, death, intrigue, magic, danger, and the timeless bonds of family and friendship from New York Times bestselling author R. A. Salvatore.

Displaced in time and unexpectedly reunited with his son Drizzt Do’Urden, Zaknafein has overcome the prejudices ingrained in him as a drow warrior to help his son battle the ambitious Spider Queen and stem the tide of darkness that has been unleashed upon the Forgotten Realms. Though Zaknafein has endured the most difficult battles, survival has come at a terrible cost, and the fight is far from over.

Facing demons and driders, Zaknafein carries the entire weight of Menzoberranzan surrounding Gauntlgym on his shoulders once more. But the chances of survival for him and his old friend and mercenary Jarlaxle look bleak. Trapped in a desperate and seemingly hopeless situation, the legendary warriors must reach deep inside themselves to face the impossible.

While the burdens Zaknafein bears are more than enough for one of Menzoberrazan’s greatest warriors, fate holds further challenges. When circumstances take an unexpected turn, Zaknafein discovers he must not only conquer the darkness but learn to accept the uncontrollable: life itself.

The stakes have never been higher for R. A. Salvatore’s most beloved creations in this final volume of his latest bestselling trilogy begun with Timeless and Boundless. A story of brave heroes filled with dangerous thrills, Relentless also considers eternal questions about morality, purpose, sacrifice, and the definition of harmony. Exciting, imaginative, and thought-provoking, it takes fans on an action-packed ride that will challenge their assumptions and leave them breathless and satisfied.

R. A. Salvatore is the bestselling author of science fiction, fantasy, and young adult fantasy in stand-alone novels and more than a dozen series of novels. He created the character of Drizzt Do’Urden, the dark elf who has withstood the test of time to stand today as an icon in the fantasy genre. He is also the acclaimed author of the New York Times bestseller Star Wars: The New Jedi Order: Vector Prime.