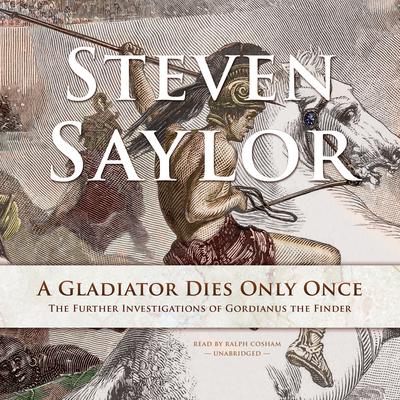 A Gladiator Dies Only Once: The Further Investigations of Gordianus the Finder

Steven Saylor's Roma Sub Rosa series, set in the later Roman Republic and featuring Gordianus the Finder, has garnered unusual acclaim from readers and reviewers alike, establishing him as one of the preeminent historical mystery writers. In A Gladiator Dies Only Once, the second collection of his award-winning stories featuring Gordianus, Saylor more than meets his own high standards. Set between the events of his novels Roman Blood and Catilina's Riddle, these nine stories of previously untold adventures from the early career of Gordianus—when his adopted son, Eco, was still a mute boy and his wife, Bethesda, was but his slave—will delight Saylor's many fans while illuminating details of the ancient world like no other writer can.

Included are "The Consul's Wife," which involves a twisted search for truth behind a threatening blind item in the Acta Diurna. In "The White Fawn," Gordianus must deal with a kidnapping and murder during the revolt of Sertorius. "Archimedes' Tomb" tells the story behind Cicero's discovery of Archimedes' tomb. Finally, "If a Cyclops Could Vanish in a Blink of an Eye" brings up a perplexing domestic situation in Gordianus' own home.

“The stories are admirably varied—some are extensive mysteries; others offer short, sharp slices of life. All are marvelous reads in themselves and marvelous reflections of ancient Rome.” —Booklist
“This collection of nine short stories establishes events in Gordianus the Finder’s early career between his first adventure and his third. Followers of this historical series, especially, will appreciate these scenarios.” —Library Journal
“The twisty fair-play plotting that marks Saylor’s best novels is very much in evidence…[An] excellent volume.” —Publishers Weekly
“All [the stories] engagingly evoke the last days of the Roman Republic and show the often tumultuous domestic lives of Gordianus’ lofty real-life acquaintances.” —Kirkus Reviews

Steven Saylor is a freelance writer, editor, and the author of novels set in ancient Rome. He studied history at the University of Texas at Austin. Saylor’s writing has appeared in the Threepenny Review, San Francisco Bay Guardian, Ellery Queen’s Mystery Magazine, and the Magazine of Fantasy and Science Fiction. He lives in Berkeley, California, and Austin, Texas.