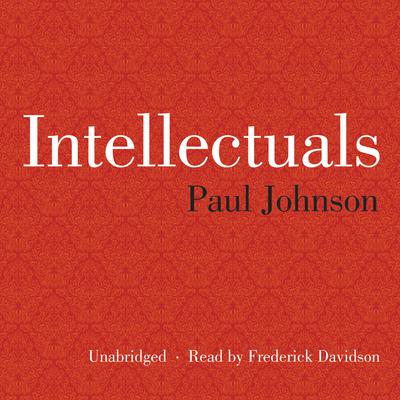 Since the time of Voltaire and Rousseau, the secular intellectual has increasingly filled the vacuum left by the decline of the cleric and assumed the functions of moral mentor and critic of mankind. This fascinating portrait of the minds that have shaped the modern world examines the moral credentials of those whose thoughts have influenced humanity.

How do intellectuals set about reaching their conclusions? How carefully do they examine the evidence? How great is their respect for truth? And how do they apply their public principles to their private lives? In an intriguing series of case studies and incisive portraits, these people are revealed as intellectuals both brilliant and contradictory, magnetic and dangerous.

“Written from a conservative standpoint, these pummeling profiles of illustrious intellectuals are caustic, skewed, thought-provoking and thoroughly engaging.” —Publishers Weekly
“Whether one agrees or not, Johnson’s profiles are frequently amusing and illuminating.” —Amazon.com, editorial review