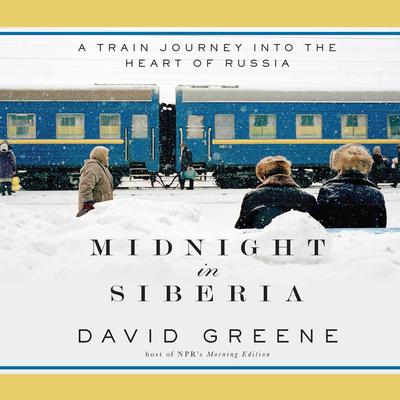 Midnight in Siberia: A Train Journey into the Heart of Russia

After two and a half years as NPR’s Moscow bureau chief, David Greene travels across the country—a 6,000 mile journey by rail, from Moscow to the Pacific port of Vladivostok—to speak with ordinary Russians about how their lives have changed in the post-Soviet years. Reaching beyond the headline—grabbing protests in Moscow, Green speaks with a group of singing babushkas from Buranovo, a teenager hawking “space rocks” from last spring’s meteor shower in Chelyabinsk, and activists battling for environmental regulation in the pollution—choked town of Baikalsk. Through the stories of fellow travelers, Greene explores the challenges and opportunities facing the new Russia: a nation that boasts open elections and newfound prosperity yet still continues to endure oppression, corruption, and stark inequality.

Set against the wintery landscape of Siberia, Greene’s lively travel narrative offers a glimpse into the soul of twentieth-century Russia: how its people remember their history and look forward to the future.

“In this picaresque story of adventure, David Greene reaches beyond Putin’s Kremlin across Siberia to show us Russian life in the raw…A storyteller with a human touch, Greene finds Russians tested by tragedy and war as he joins them in their cramped apartments, jammed trains, and gulping beer and pickled horse sausage in their steam baths, facing an uncertain future with an unexpected streak of inner wildness.” —Hedrick Smith, New York Times bestselling author of The New Russians
“Describe[s] the Russia of the vast interior…An impressionistic book, a book about people along the way.” —Seattle Times
“When NPR’s Moscow Bureau chief David Greene traveled across Russia on the Trans-Siberian Railroad, he wasn’t in search of tundra and polar bears. He was searching for men and women who could give him a fresh sense of Putin’s ‘New Russia.’ With its numerous stops and stay-overs, his 6,000-mile journey did just that, introducing him to scores of ordinary Russians who spoke freely about how their lives had changed in the post-Soviet years. Midnight in Siberia truly qualifies as a travel essay that delivers far, far more than local color.” —Barnes&Noble.com, editorial review
“Greene’s journey enables him to get past the headlines and provide insightful observations about the politics and culture of Russia today.” —Library Journal (starred review)
“[A] travelogue that reads like a series of episodic radio pieces in the NPR style, a collage of Green’s interviews and insights from scholars about Russian history that attempts to answer a few difficult questions: what do the Russians want? Why do they tolerate a corrupt and restrictive government?..What Greene finds is complex and frequently contradictory but all the more thought provoking…Despite the poverty and repression he frequently encounters, Greene remains optimistic throughout his travels, and he reproduces the source of this conviction in this collection of vignettes.” —Publishers Weekly
“A former Russia correspondent for NPR ends his gig by taking a train across Siberia, generating new experiences and remembering earlier ones…a journey that is personal and emotional, both actual and metaphorical…Glowing in its profound affection for the Russian people, an affection Greene convinces readers to share.” —Kirkus Reviews
“Greene is a great storyteller, and what a story he has to tell. A fascinating and thought-provoking journey deep into Russia’s physical vastness and soul. Greene’s landscape is inhabited by a cast of characters that light up both and would have made Anton Chekhov proud. A first-rate tale that puts you aboard the Trans-Siberian Railroad on the journey of a lifetime.” —Aaron David Miller, author of The End of Greatness
“Beautifully written…The sharply observed vignettes, combined with the moving, elegiac quality of the prose make it a hard book to put down. David Greene’s travels provide insights and context for some of the more dramatic recent events in Russia that will appeal to both the casual traveler and the seasoned observer.” —Fiona Hill, coauthor of Mr. Putin: Operative in the Kremlin
“Greene’s narration is reflective and pleasantly relaxed…Greene is able to impart additional emotion to the stories where appropriate, having lived through the experiences firsthand or listened directly to the people telling their stories. The result is an eye-opening look at modern-day Russia and the Russian character, both in the big cities and in the countryside.” —AudioFile

David Greene is NPR’s morning programming host and correspondent. In this role he is the primary substitute host for Morning Edition as well as Weekend Edition Saturday and Weekend Edition Sunday. When he is not hosting he brings his deep reporting talents to these programs.