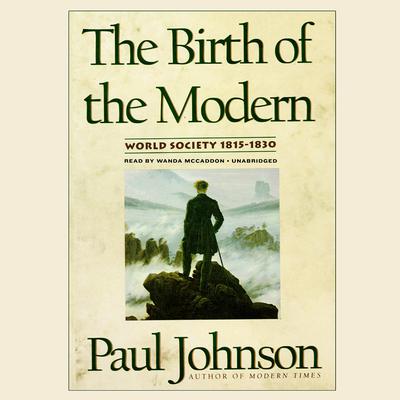 This is an extraordinary chronicle of the fifteen years, 1815–1830, that laid the foundations of modern society. It is a history of people, ideas, politics, manners, morals, economics, art, science and technology, diplomacy, business and commerce, literature, and revolution.

From Wellington at Waterloo and Jackson at New Orleans to the surge of democratic power and reform, this tumultuous period saw the United States transform itself from an ex-colony into a formidable nation, Britain become the first industrial world power, Russia develop the fatal flaws that would engulf her in the twentieth century, and China and Japan set the stage for future development and catastrophe. Provocative, challenging, and listenable, this remarkable story is told through the lives and actions of its outstanding, curious, and ordinary people.

“A colossal effort of energy and imagination.” —Hugh Thomas, author of Rivers of Gold
“Fascinating…A savory social history, spiced with lively gossip…It is never dull. In many ways a tour de force.” —New York Times Book Review
“Amazing…Crowded with wonderful portraiture, heroic feats of intellect and imagination…Reads at times like one of the novels it describes so brilliantly.” —Wall Street Journal
“A considerable achievement…Immensely readable…Readers will learn a lot from The Birth of the Modern and have a good time while they’re at it.” —Newsday
“We meet an enormous gallery of brilliant, eccentric, and (especially the poets) licentious characters…The author’s sheer enthusiasm [makes] the tiniest fragments of recorded history burst with light and color.” —Los Angeles Times Book Review
“Marvelously readable.” —Publishers Weekly
“Lively…Provocative.” —Library Journal
“Johnson…is a master of vigorous narratives on epic topics. Astoundingly, he writes with fascination about events and movements in virtually all fields of human endeavor…A lively and readable history.” —Kirkus Reviews