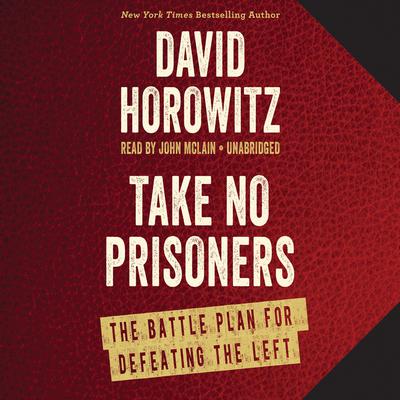 Take No Prisoners: The Battle Plan for Defeating the Left

Battle-scarred political warrior David Horowitz says it's time for conservatives to take the gloves off—and take our country back.

America is at a crucial turning point in its history, and Republicans have been losing ground to Democrats for too long. In Take No Prisoners, Horowitz sounds a clarion call for conservatives to use liberals' take-no-prisoners playbook against them. From his days as a founder of the radical New Left movement in the 1960s to his storied career as a leading conservative activist, Horowitz has a lifetime of experience in battleground politics. Now he lays out a winning political strategy for the Right that can save the country from sliding into economic and social ruin.

If conservatives want a better future for America, they need to be able to beat liberals at their own game—and David Horowitz is telling them how.

David Horowitz grew up a “red diaper baby” in a communist community in Sunnyside, Queens. He studied literature at Columbia, taking classes from Lionel Trilling, and became a “new leftist” during the Soviet invasion of Hungary in 1956.