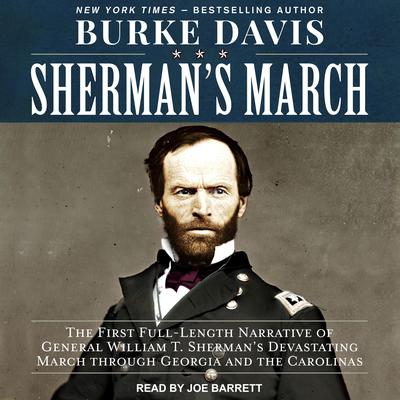 A New York Times bestselling author's account of the devastating military campaign that broke the Confederacy's back in the last months of the Civil War.

In November 1864, just days after the reelection of President Abraham Lincoln, General William T. Sherman vowed to "make Georgia howl." The hero of Shiloh and his 65,000 Federal troops destroyed the great city of Atlanta, captured Savannah, and cut a wide swath of destruction through Georgia and the Carolinas on their way to Virginia. A scorched-earth campaign that continues to haunt the Southern imagination, Sherman's "March to the Sea" and ensuing drive north was a crucial turning point in the War between the States.

Weaving together hundreds of eyewitness accounts, bestselling author Burke Davis tells the story of this infamous episode from the perspective of the Union soldiers and the Confederate men and women who stood in their path. Eloquent, heartrending, and vastly informative, Sherman's March brilliantly examines one of the most polarizing figures in American military history and offers priceless insights into the enduring legacy of the Civil War.

Burke Davis is the author of Gray Fox and many other books. He lives in Meadows of Dan, Virginia, and Greensboro, North Carolina.