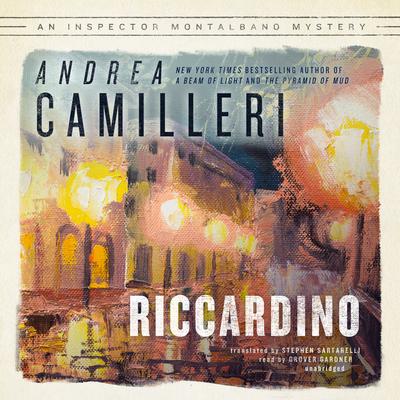 Montalbano receives an early-morning phone call, but this time it’s not Catarella announcing a murder, but a man called Riccardino who’s dialed a wrong number and asks him when he’ll be arriving at the meeting. Montalbano, in irritation, says: “In ten minutes.” Shortly after, he gets another call, this one announcing the customary murder. A man has been shot and killed outside a bar in front of his three friends. It turns out to be the same man who called him.

Thus begins an intricate investigation further complicated by phone calls from “the Author” in a tour de force of metafiction and Montalbano’s last case.

“Incisive wit colors this insightful and intriguing farewell. The sad, poetic ending is perfect.” —Publishers Weekly (starred review)
“The long-running and much-loved Salvo Montalbano series, set in Vigàta, Sicily, concludes with an astonishing, meta-infused narrative that integrates the series’ creator, Camilleri himself, into the story…What follows will delight Camilleri’s legions of fans, many of whom have long felt a meta-infused connection of their own with Montalbano, his friends and colleagues, and the world of Vigàta.” —Booklist (starred review)

Andrea Camilleri (1925–2019) wrote the internationally bestselling Inspector Montalbano mysteries as well as historical novels. His books have been made into television shows in Italy and translated into thirty-two languages. His thirteenth Montalbano novel, The Potter’s Field, won the Crime Writers’ Association International Dagger Award and was long-listed for the International IMPAC Dublin Literary Award.