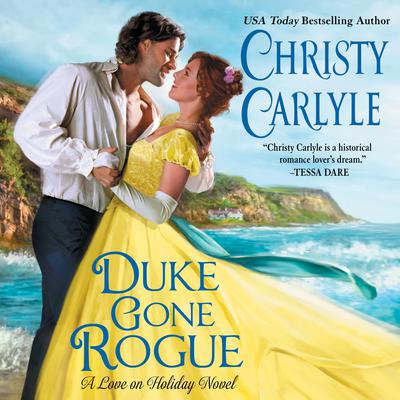 The Love on Holiday Series: Book 1

Will Hart, the Duke of Ashmore, is everything his father was not: scrupulously honest, forbidding, and apparently joyless. As a duke, he’s a catch, but as a grumpy stick-in-the mud, no lady knows quite how to catch his eye. When his sisters concoct a plan for him to visit a run-down family property in Cornwall, he reluctantly agrees, hoping it will be a chance for him to rediscover the carefree man he once was.

Madeline Ravenwood believes she can do anything she puts her mind to, including running the gardening business she inherited from her father and being a founding member of the Royal Visit Committee. Hard at work preparing for Princess Beatrice’s visit to judge their annual flower show, the appearance of a stern, handsome duke is a distraction Maddie doesn’t need.

Tasked by the committee to convince the duke to repair his ramshackle manor house in time for the royal visit, he agrees, if she will join him as he explores Cornwall. Spending their days, and nights, together, Will’s love for Maddie becomes too strong to ignore. But Maddie knows how different their worlds are and when the burdens of his title reappear, can Will convince her that she’s the woman he’s been waiting for?

Christy Carlyle is a USA Today bestselling author fueled by Pacific Northwest coffee and inspired by multiple viewings of every British costume drama she can get her hands on that writes sensual historical romance set in the Victorian era. She loves heroes who struggle against all odds and heroines who are ahead of their time. A former teacher with a degree in history, she finds there’s nothing better than being able to combine her love of the past with a die-hard belief in happy endings.