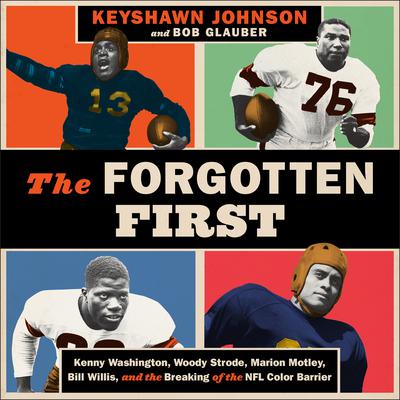 The unknown story of the Black pioneers who collectively changed the face of the NFL in 1946.

The Forgotten First chronicles the lives of four incredible men, the racism they experienced as Black players entering a segregated sport, the burden of expectation they carried, and their many achievements, which would go on to affect football for generations to come.

More than a year before Jackie Robinson broke the color barrier in Major League Baseball, there was another seismic moment in pro sports history. On March 21,1946, former UCLA star running back Kenny Washington—a teammate of Robinson’s in college—signed a contract with the Los Angeles Rams. This ended one of the most shameful periods in NFL history, when African-American players were banned from league play.

Washington would not be alone in serving as a pioneer for NFL integration. Just months after he joined the Rams, thanks to a concerted effort by influential Los Angeles political and civic leaders, the team signed Woody Strode, who played with both Washington and Robinson at UCLA in one of the most celebrated backfields in college sports history. And that same year, a little-known coach named Paul Brown of the fledgling Cleveland Browns signed running back Marion Motley and defensive lineman Bill Willis, thereby integrating a startup league that would eventually merge with the NFL.

The Forgotten First tells the story of one of the most significant cultural shifts in pro football history, as four men opened the door to opportunity and changed the sport forever.

“An awesome story filled with important issues that still resonate today, and it is not only recommended reading but required reading.” —Adam Schefter, ESPN, author of The Man I Never Met: A Memoir
“Absolutely remarkable and eye-opening.”  —Mike Jones, NFL columnist for USA Today

Keyshawn Johnson played eleven seasons in the NFL with the Jets, Tampa Bay Buccaneers, and Dallas Cowboys, and won a Super Bowl in Tampa after the 2002 season. He was recently named the co-host of a nationally broadcast ESPN morning radio show and makes regular appearances on the network's NFL Live, First Take, Get Up, as well as guest appearances on a variety of other media platforms.

Bob Glauber is the NFL columnist for New York's Newsday and has covered the NFL since 1985. A two-time winner of the New York State Sportswriter of the Year by the National Sports Media Association, as well as a first-place honoree of the Associated Press Sports Editors, Glauber has served as president of the Professional Football Writers of America since 2018.