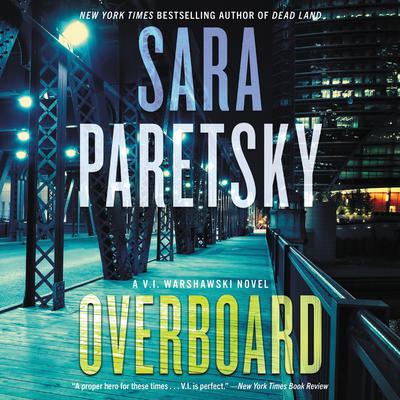 On her way home from an all-night surveillance job, V.I. Warshawski is led by her dogs on a mad chase that ends when they discover a badly injured teen hiding in the rocks along Lake Michigan. The girl only regains consciousness long enough to utter one enigmatic word. V.I. helps bring her to a hospital, but not long after, she vanishes before anyone can discover her identity. As V.I. attempts to find her, the detective uncovers an ugly consortium of Chicago powerbrokers and mobsters who are prepared to kill the girl. And now V.I.’s own life is in jeopardy as well.

Told against the backdrop of a city emerging from its pandemic lockdown, Overboard lays bare the dark secrets and corruption buried in Chicago’s neighborhoods in masterly fashion.

Sara Paretsky is the New York Times bestselling author of numerous previous novels, including the renowned V. I. Warshawski series, of which Blacklist won the Dagger Award. She is one of only four living writers to have received both the Grand Master Award from the Mystery Writers of America and is also the recipient of the Cartier Diamond Dagger Award given by the British Crime Writers’ Association. She is credited with transforming the role and image of women in the crime novel.