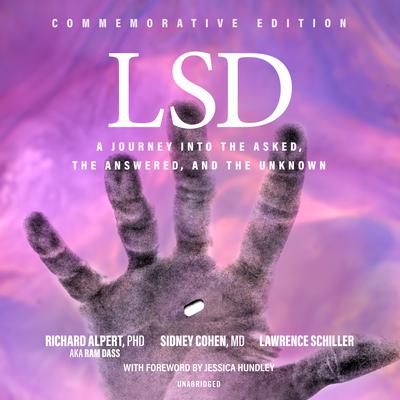 LSD: A Journey into the Asked, the Answered, and the Unknown

In 1966, two authorities on LSD—Richard Alpert, PhD, AKA Ram Dass, and Sidney Cohen, MD—spoke out on the merits and dangers of the psychedelic drug as acclaimed photographer Lawrence Schiller documented the experiences as they were happening. This Commemorative Edition of LSD looks back at the public’s use of LSD in the 1960s and features a new introduction that explores the book’s relevance to today’s psychedelic renaissance.

“With LSD, Schiller, Cohen, and Alpert, together offer an authentic document of an era, and a moment that feels both resonant and relevant today.” —Jessica Hundley, journalist

Ram Dass is the author of the landmark classic Be Here Now and the acclaimed Still Here. After meeting his guru in India in 1967, Ram Dass became a pivotal spiritual influence on American culture. He currently resides in Maui.

Sidney Cohen, MD (1910–1987) was a pioneer in research on LSD and other mood-altering drugs as an academic and as the first director of the Division of Narcotic Abuse and Drug Addiction at the National Institute of Mental Health. He was a psychiatrist, professor of medicine, and prolific author.

Lawrence Schiller first used photography as a way to see the world. With a career spanning more than five decades, Schiller has created a visual and written history of America during some of the most tumultuous and important years of the twentieth century. Schiller has written four New York Times bestsellers and his films have won an Oscar and seven Emmys. He currently resides in Pennsylvania.