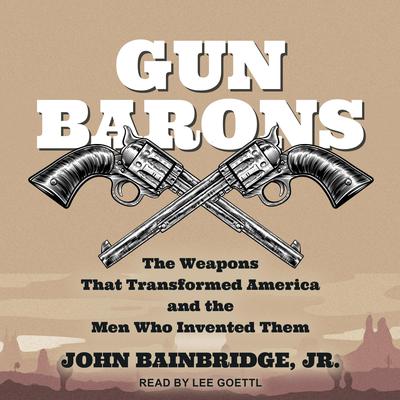 Gun Barons: The Weapons That Transformed America and the Men Who Invented Them

Love them or hate them, guns are woven deeply into the American soul. Names like Colt, Smith & Wesson, Winchester, and Remington are legendary. Yet few people are aware of the roles these men played at a crucial time in United States history, from westward expansion in the 1840s, through the Civil War, and into the dawn of the Gilded Age. Through personal drive and fueled by bloodshed, they helped propel the young country into the forefront of the world's industrial powers.

Their creations helped save a nation divided, while planting seeds that would divide the country again a century later. Their inventions embodied an intoxicating thread of American individualism—part fiction, part reality—that remains the foundation of modern gun culture. They promoted guns not only for the soldier, but for the Everyman, and also made themselves wealthy beyond their most fevered dreams.

Gun Barons captures how their bold inventiveness dwelled in the psyche of an entire people, not just in the minds of men who made firearm fortunes. Whether we revere these larger-than-life men or vilify them, they helped forge the American character.