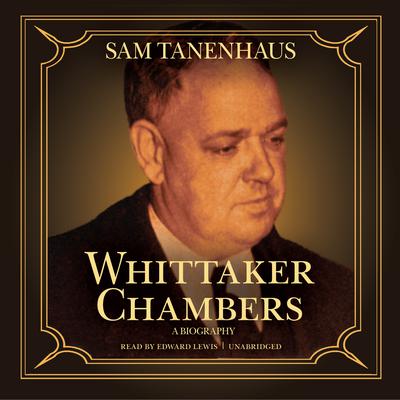 Winner of the 1997 Los Angeles Times Book Prize for Biography

A 1998 Pulitzer Prize Finalist for Biography/Autobiography

Whittaker Chambers is the first biography of this complex and enigmatic figure. Drawing on dozens of interviews and on materials from forty archives in the United States and abroad—including still-classified KGB dossiers—Tanenhaus traces the remarkable journey that led Chambers from a sleepy Long Island village to center stage in America's greatest political trial and then, in his last years, to a unique role as the godfather of post-war conservatism.

This biography is rich in startling information about Chambers' days as New York's "hottest literary Bolshevik"; his years as a Communist agent and then defector, hunted by the KGB; his conversion to Quakerism; his secret sexual turmoil; his turbulent decade at Time magazine, where he rose from the obscurity of the book-review page to transform the magazine into an oracle of apocalyptic anti-Communism. But all this was a prelude to the memorable events that began in August 1948, when Chambers testified against Alger Hiss in the spy case that changed America. Whittaker Chambers goes far beyond all previous accounts of the Hiss case, re-creating its improbable twists and turns and disentangling the motives that propelled a vivid cast of characters in unpredictable directions.

A rare conjunction of exacting scholarship and narrative art, Whittaker Chambers is a vivid tapestry of twentieth century history.

“Tanenhaus…has done a careful and exhaustive job of research…His prose is clear, trenchant, and well-paced…[Chambers] was thoroughly American in the desperation of his eternal quest for the meaning of life. Mr. Tanenhaus’ admirable biography goes as far as one can reasonably expect in unraveling the puzzle.” —New York Times Book Review
“Remarkable…The kind of writing that can keep you propped up against your pillow late at night.” —New York Times
“Tanenhaus had the ingenious idea of filling out what Chambers wrote by going to the memoirs, letters, papers, FBI interrogations, and testimony of all the others in the story. As a result, he rounds out Chambers’ account from different angles, drawing on the accounts of many people who knew Chambers.” —New York Review of Books
“A coolly objective look at the most controversial figure in the postwar crusade against American Communists…Scrupulously evenhanded…Chambers’ life makes a perfect case study of the most morally fraught period in American history.” —Amazon.com editorial review
“[Chambers] contended that even at the risk of self-destruction, it was important to examine why some of the best and brightest of the interwar years had embraced communism, why some persisted in self-deception and disloyalty and why others broke ranks and recanted. Tanenhaus persuasively and movingly examines such double lives of these communists, lives which were driven by a perverse idealism that functioned almost as a new religion.” —Publishers Weekly
“When a figure has been damned or apotheosized beyond limit, as Chambers was in both directions, a balanced biography would seem to be a vain hope. But here it is, a magnificent one, a definitive one, about the man at the center of this country’s most sensational spy scandal. Not only is Tanenhaus’ research formidable and exhaustive, his narrative unfolds with supple effortlessness as it reveals and appraises the dreams, dilemmas, and dangers of Chambers’ life.” —Booklist
“Tanenhaus depicts Chambers as a deeply flawed but brilliant and tragic figure, who proved to be a more steadfast idealist than most of the people around him…Tanenhaus writes well and sometimes brilliantly in arguing that Chambers was far more than a supporting actor to McCarthyism and the Cold War…Expect this book to stoke fires already burning for nearly half a century.” —Kirkus Reviews
“Whittaker Chambers was one of the deepest, knottiest, and most enigmatic characters of our age. In this riveting full-length portrait, Tanenhaus gives us the whole man, warts and all—while showing that, covered as he was with those warts, Whittaker Chambers spoke the truth…Whittaker Chambers makes an invaluable contribution to the histories of American Communism, anti-Communism, and anti-anti-Communism. It is also as compelling to read as any espionage thriller.” —Commentary magazine
“With a strong and confident voice, [Lewis] masterfully handles this comprehensive biography…The high point, [Lewis’] reading of the Hiss trial, communicates the many suspenseful twists of the event.” —AudioFile