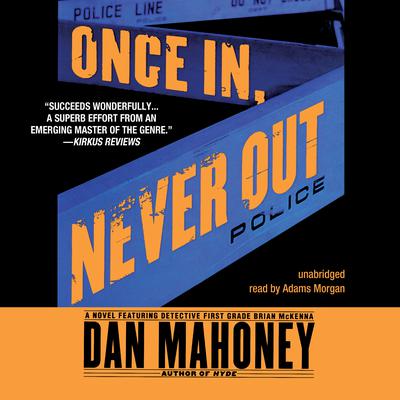 Once In, Never Out

When two bombs kill a British diplomat and his wife in Reykjavik, Thor Erikson, Iceland’s only homicide detective, begins his fifth murder case in twelve years. Then word comes of a woman’s mutilated body, washed up in a distant village.

Meanwhile, NYPD Detective Brian McKenna is on a high-priority search for an Irish-born waitress, Meaghan Maher, whose brother, a priest, is an aid to the Cardinal of the Archdiocese of New York.

McKenna tracks Meaghan to Iceland, but soon is chasing a man with ties to Ireland, the NYPD, and a series of unsolved murders linked with other bombings. Racing from Iceland to Belfast to Dublin and back to New York, McKenna knows the St. Patrick’s Day Parade will be the bomber’s next target—unless McKenna finds him first.

“Adams Morgan is a highly gifted presenter. His crisp, direct delivery cuts through this exciting story like a knife through soft butter…Mahoneys’ compelling words seem to be supercharged by Morgan’s voice…Winner of the AudioFile Earphones Award.” —AudioFile
“A satisfying police whodunit…Mahoney doesn’t sell his readers short…He keeps the action moving.” —Chicago Tribune
“Morgan is a wonderful reader. His voice radiates intelligence and is a pleasure to hear.”  —Kliatt
“Mahoney knows the drill on conducting a manhunt…[He] takes us through the crime scene photos, the morgue visits, the criminal profiling, the computer searches, and all the rest of it with scientific precision and absolute authenticity.” —New York Times Book Review
“A gripping police thriller…Absorbing exotic background and richly developed characters.” —Publishers Weekly
“Succeeds wonderfully…A superb effort from an emerging master of the genre.” —Kirkus Reviews