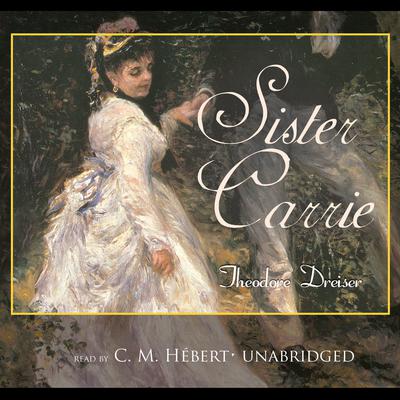 When small-town girl Carrie Meeber sets out for Chicago, she is equipped with nothing but a few dollars, a certain unspoiled beauty and charm, and a pitiful lack of preparation for the complex moral choices she will face. Adrift in an indifferent city, she struggles from the sweatshop to stage success and inspires an obsessive love in a married man twice her age—which threatens to destroy him.

Dreiser transforms the conventional fallen-woman story into a genuinely original work of imaginative fiction. He hurls his impressionable eighteen-year-old heroine into the amoral world of the big city and reveals, with powerful insight, the driving forces of our culture: America's restless idealism, glamorous material seductions, and spiritual innocence. Many consider this the greatest novel on urban life ever written.

“Its outstanding merit is its simplicity, its unaffected seriousness and fervor.” —H. L. Mencken
“Dreiser’s great first novel…came to housebound and airless America like a great free Western wind, and to our stuffy domesticity gave us the first fresh air since Mark Twain and Whitman.” —Sinclair Lewis
“Absolutely free from the slightest trace of sentimentality or pettiness, and dominated everywhere by a serious and strenuous desire for truth.” —Academy
“It is a cruel, merciless story, intensely clever in its realism, and one that will remain impressed in the memory of the reader for many a long day.” —London Express

Theodore Dreiser (1871–1945), American novelist, was born in Terre Haute, Indiana, and attended Indiana University. He began his writing career as a newspaperman, working in Chicago, St. Louis, and Pittsburgh. His first novel, Sister Carrie (1900), was purchased by a publisher who thought it objectionable and made little effort to promote its sale. With the publication of The Financier in 1912, he was able to give up newspaper work and devote himself to writing. He became known as one of the principal exponents of American naturalism, and in 1944, he was awarded the Merit Medal for Fiction by the American Academy of Arts and Letters.