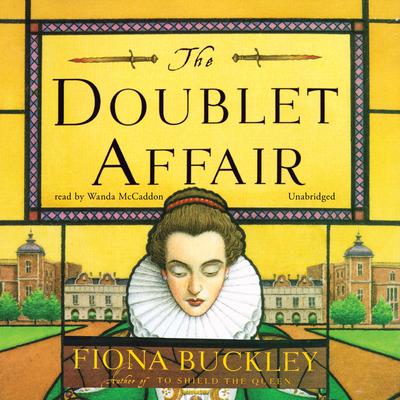 The Doublet Affair: A Mystery at Queen Elizabeth I's Court

In To Shield the Queen, we were introduced to Ursula Blanchard, lady-in-waiting to Queen Elizabeth I and one of the most entrancing mystery heroines to come along in many a season. Having once saved the Virgin Queen from political disaster, now young Ursula faces an even greater challenge. Some of her old acquaintances may be plotting to overthrow Elizabeth in favor of Mary, Queen of Scots, and the reestablishment of the Catholic faith. Secretary of State Sir William Cecil needs a spy in the Mason home, and Ursula is the obvious choice.

Torn between her devotion to Elizabeth and her longing to be reunited with her exiled Catholic husband in France, Ursula makes a difficult bargain that balances personal happiness against duty to her queen and country. Her journey takes her into dangerous territory, and whatever happens, she will never again be quite as trusting or secure.

“Buckley pens an intricate tale rich in period detail and vivid characters.” —Publishers Weekly
“[A] Sixteenth century mystery series as complicated and charming as an Elizabethan knot garden.” —Tampa Tribune
“Buckley’s imaginative sense of quotidian life in Elizabethan England is delightful.” —Amazon.com, editorial review
“[McCaddon] offers an outstanding reading. She has a decided British accent, appropriate to the reading. Her voice is clear, well measured and well cadenced. She has distinct and appropriate voices for each character and keeps the book moving along quickly.” —Kliatt