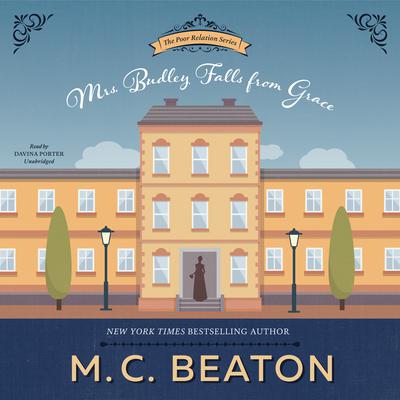 The loveable characters from the Poor Relation Hotel return in this sparkling and adventurous Regency romance from M. C. Beaton.

Eliza Budley is a beautiful widow whose husband gambled away his fortune. So when the poor relations need to acquire some valuables to keep the hotel afloat and Eliza draws the short straw, Lady Fortescue reminds the others that Mrs. Budley has no relatives on whom she can call. Gentle Mrs. Budley thinks she has escaped her fate until Sir Philip comes up with a plan. He has heard that the elderly Marquess of Peterhouse is senile, a widower, extremely rich, and unlikely to remember whether Mrs. Budley is a relative or not. So off Mrs. Budley goes to the bleak castle, where the marquess turns out to be not so old, hardly senile, and, in fact, quite handsome.

“Nicely atmospheric…Most notable for its gentle humor and adventurous spirit.” — Publishers Weekly
“When funds are particularly low at the Poor Relation Hotel,…the timid, widowed Mrs. Budley is sent off to the country home of a doddering, dying fellow who does not know his relatives from a bedpost,…[but] Mrs. Budley winds up captivated by the company of the young new heir. Of course, all ends well, as in Chesney’s previous Regencies.” — Booklist