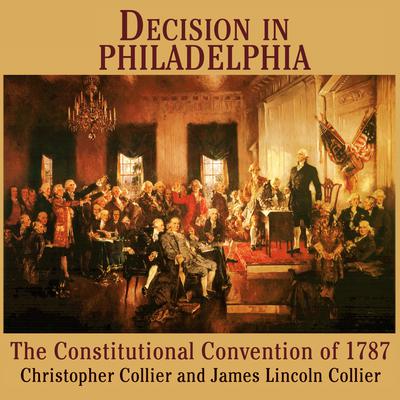 Decision in Philadelphia: The Constitutional Convention of 1787

Fifty-five men met in Philadelphia in 1787 to write a document that would create a country and change a world: the Constitution. Here is a remarkable rendering of that fateful time, told with humanity and humor. Decision in Philadelphia is the best popular history of the Constitutional Convention; in it, the life and times of eighteenth century America not only come alive, but the very human qualities of the men who framed the document are brought provocatively into focus—casting many of the Founding Fathers in a new light. A celebration of how and why our Constitution came into being, Decision in Philadelphia is also a testament of the American spirit at its finest.

“Bronson Pinchot’s tenor voice is expressive, confident, and steady throughout.” —Audiofile
“Modern readers will find the authors’ comments on the Constitution particularly interesting, casting many of the Founding Fathers in a new light.” —Library Journal

Christopher Collier is an author and historian. He attended Clark University and Columbia University, where he earned his PhD. He was the official Connecticut State Historian from 1984 to 2004 and is now professor of history emeritus at the University of Connecticut. He is the brother of James Lincoln Collier, with whom he has written a number of novels, most of which are based on historic events. His books have been nominated for several awards, including the Newbery Honor and the Pulitzer Prize.

James Lincoln Collier has written many books for children, including Give Dad My Best and Planet out of the Past. He has also contributed more than five hundred articles to the New York Times Magazine, Reader’s Digest, and Boy’s Life. His honors include the Kidger Prize for Teaching, the Jane Addams Peace Prize, and the Newbery Honor.