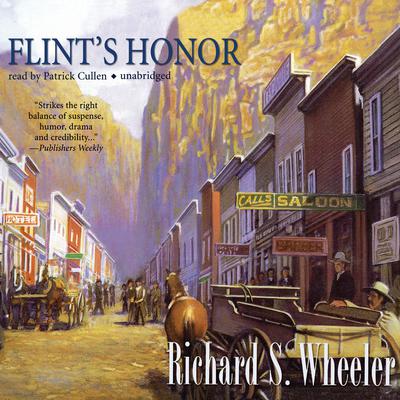 Sam Flint is a dedicated frontier journalist whose only weapon is the truth. But when he pulls into Silver City to set up his crusading weekly newspaper, he fears he’s made a mistake. The overpopulated town is being run into the ground by the corrupt editor of the Silver City Democrat, Digby Westminster. A friend of merchants and flatterer of politicians, the manipulative scoundrel has grown fat ridiculing the miners and working girls while making sure they are ruthlessly taxed into destitution.

Flint believes strongly that an honest journalist must challenge the Democrat. But how can he launch his own paper when the whole town is in his rival’s pocket?

“Strikes the right balance of suspense, humor, drama and credibility…This conclusion to the trilogy has pizzazz. Shrewdly plotted and refreshingly entertaining, it is by far the best of the three.” —Publishers Weekly
“Cullen gets into the fast-paced story and does an excellent job giving [it] life.” —Kliatt

Richard S. Wheeler is the award-winning author of historical novels, biographical novels, and Westerns. He began his writing career at age fifty, and by seventy-five he had written more than sixty novels. He began life as a newsman and later became a book editor, but he turned to fiction full time in 1987. Wheeler started by writing traditional Westerns but soon was writing large-scale historical novels and then biographical novels. In recent years he has been writing mysteries as well, some under the pseudonym Axel Brand. He has won six Spur Awards from the Western Writers of America and the Owen Wister Award for lifetime achievement in the literature of the American West.