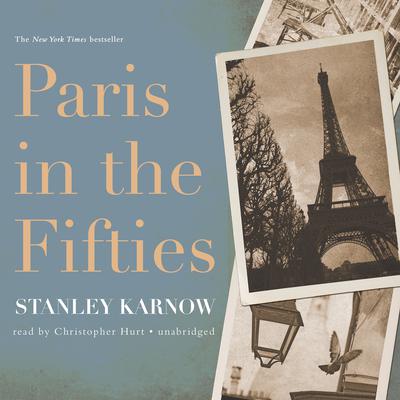 Paris in the Fifties

In June 1947, fresh out of college and long before he would win the Pulitzer Prize and become known as one of America’s finest historians, Stanley Karnow boarded a freighter bound for France, planning to stay for the summer. He stayed for ten years, first as a student and later as a correspondent for Time magazine. By the time he left, Karnow knew Paris so intimately that his French colleagues dubbed him “le plus parisien des Américains”—the most Parisian American.

Now, Karnow returns to the France of his youth, perceptively and wittily illuminating a time and place like no other. Karnow came to France at a time when the French were striving to return to the life they had enjoyed before the devastation of World War II. Yet even during food shortages, political upheavals, and the struggle to come to terms with a world in which France was no longer the mighty power it had been, Paris remained a city of style, passion, and romance.

Paris in the Fifties transports us to Latin Quarter cafés and basement jazz clubs, to unheated apartments and glorious ballrooms. We meet such prominent political figures as Charles de Gaulle and Pierre Mendès-France, as well as Communist hacks and the demagogic tax rebel Pierre Poujade. We get to know illustrious intellectuals—among them Jean-Paul Sartre, Simone de Beauvoir, Albert Camus, and André Malraux—and visit the glittering salons where aristocrats with exquisite manners mingled with trendy novelists, poets, critics, artists, composers, playwrights, and actors. We meet Christian Dior, who taught Karnow the secrets of haute couture, and Prince Curnonsky, France’s leading gourmet, who taught the young reporter to appreciate the complexities of haute cuisine. Karnow takes us to marathon murder trials in musty courtrooms, accompanies a group of tipsy wine connoisseurs on a tour of the Beaujolais vineyards, and recalls the famous automobile race at Le Mans when a catastrophic accident killed more than eighty spectators. Back in Paris, Karnow hung out with visiting celebrities like Ernest Hemingway, Orson Welles, and Audrey Hepburn, and in Paris in the Fifties we meet them too.

A veteran reporter and historian, Karnow has written a vivid and delightful history of a charmed decade in the greatest city in the world.

“An absolute treasure…It should be read slowly and savored.” —Doris Kearns Goodwin, Pulitzer Prize–winning author
“A magnificent urban seductress, Paris maintains her power over generation after generation of young men and women. In Paris in the Fifties, Stanley Karnow recalls the city at a time when she reawakened at her ravishing best. It is a vivid and elegant remembrance of all our yesterdays.” —Morley Safer, New York Times bestselling author and CBS News correspondent
“Karnow has re-created Paris with the fondness and the lucid detail that only a journalist in love with his subject could convey. The next best thing to being in the fabled Paris of the fifties is to read Karnow’s memories of it.” —Peter Arnett, reporter and journalist
“[Karnow] makes it all come alive…His eye is clear and unsentimental, and his dispatches are still vivid today.” —Richard Holbrooke, American diplomat and author
“Paris in the Fifties has a certain allure that makes it well worth dipping into, if only to select the bits and snippets that entertain or bring back memories.” —New York Times Book Review
“I can’t think of a better way to transcend the immutable passage of time. The reporting is current, rich, and, strangely enough, appropriate for our times…Readers will be entranced.” —Washington Post
“[Karnow's] descriptions are as rich as they are comprehensive…This wonderful book is reassurance that no matter what modern threats to culture may come, toujours Paris: we’ll always have Paris. And that is true comfort to any expatriate at heart.” —Amazon.com, editorial review
“[Christopher Hurt] gives us a light, gossipy, amiable reading in brisk American and excellent French.” —AudioFile
“Hurt offers a flawless…French pronunciation of Paris in the Fifties.” —Booklist
“Pulitzer Prize–winning author Karnow vividly chronicles his early years in Paris, where he worked as a young reporter for Time magazine. Displaying a broad knowledge of French history and civilization, Karnow offers anecdotes ranging from a description of the construction of the guillotine to a report of a disastrous automobile crash at the racetrack at Le Mans in 1955…His entertaining book will have enormous appeal to anyone interested in Paris and France, especially those fortunate enough to have lived in that great city in their youth. Highly recommended.” —Library Journal
“Strong reporting and storytelling skills combine to make this remembrance of Paris past a fine read…Artfully blends carefully detailed immediacy with considered personal reflection…Karnow uncorks a string of impressively realized chapters devoted to a wide variety of topics…He never fails to provide historical context…Even the most jaded Francophile will find much stimulation here—indeed, so will any fan of punchy prose and intelligent observation and reflection.” —Kirkus Reviews

Stanley Karnow was born in New York and graduated from Harvard in 1947. He began his journalistic career in Paris in 1950 as a Time correspondent. He covered Southeast Asia from 1959 until 1974 for Time, Life, the Saturday Evening Post, the London Observer, the Washington Post, and NBC News and was later an editor for the New Republic. He has written a number of books, including the bestselling Vietnam: A History and the Pulitzer Prize–winning In Our Image: America’s Empire in the Philippines. He lives in Washington, DC.