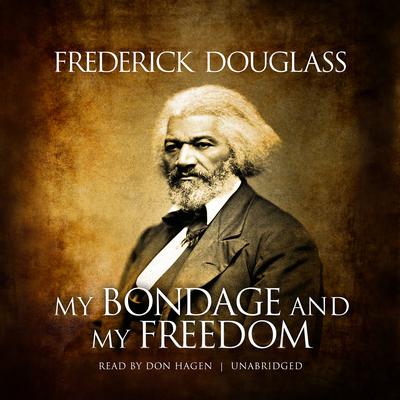 My Bondage and My Freedom

This is Ex-slave Frederick Douglass's second autobiography. it was written after ten years of reflection following his legal emancipation in 1846 and his break with his mentor William Lloyd Garrison catapulted Douglass into the international spotlight as the foremost spokesman for American blacks, both freed and slave. Written during his celebrated career as a newspaper editor and speaker, My Bondage and My Freedom reveals the author of the Narrative of the Life of Frederick Douglass, written in 1845, has grown more mature, forceful, analytical, and complex with a deepened commitment to the fight for equal rights and liberties.

“My Bondage and My Freedom, besides giving a fresh impulse to antislavery literature, [shows] upon its pages the untiring industry of the ripe scholar.” —William Wells Brown, novelist and abolitionist lecturer

Frederick Douglass (1818–1895), né Frederick Augustus Washington Bailey, was born into slavery in Maryland. Upon successfully escaping slavery—on his third attempt—in 1838, Douglass became one of the key leaders of the abolitionist movement in the United States. An extremely gifted orator, he repeatedly risked his own freedom as an antislavery speaker, writer, and statesman. A firm believer in equality for all people, including Native Americans, women, and immigrants, Douglass was also an activist in the women’s suffrage movement. He died in Washington DC, shortly after he attended a meeting of the National Council of Women, where he had received a standing ovation for his enormous contribution to human rights.