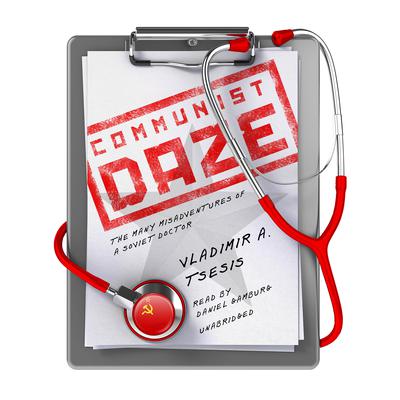 Communist Daze: The Many Misadventures of a Soviet Doctor

Welcome to Gradieshti, a Soviet village awash in gray buildings and ramshackle fences, a home to a large, collective farm and to the most oddball and endearing cast of characters possible.

For three years in the 1960s, Vladimir Tsesis―inestimable Soviet doctor and irrepressible jester―was stationed in a village where racing tractor drivers tossed vodka bottles to each other for sport; where farmers and townspeople secretly mocked and tried to endure the Communist way of life; where milk for children, running water, and adequate electricity were rare; where the world’s smallest, motley parade became the country’s longest; and where one compulsively amorous Communist Party leader met a memorable, chilling fate.

From a frantic pursuit of calcium-deprived, lunatic Socialist chickens to a father begging on his knees to Soviet officials to obtain antibiotics for his dying child, Vladimir’s tales of Gradieshti are unforgettable. Sometimes hysterical, often moving, always a remarkable and highly entertaining insider’s look at rural life under the old Soviet regime, they are a sobering exposé of the terrible inadequacies of its much-lauded socialist medical system.

Vladimir Tsesis grew up in the former Soviet Union and practiced general pediatrics there for ten years before emigrating to the United States in 1974. After completing his residency at Illinois Masonic Medical Center of Chicago, he resumed his private practice in Illinois. Dr. Tsesis created a unique patient-pleasing office concept, and is the author of several articles published in pediatric magazines. Today he is a clinical assistant professor at the University of Illinois at Chicago.