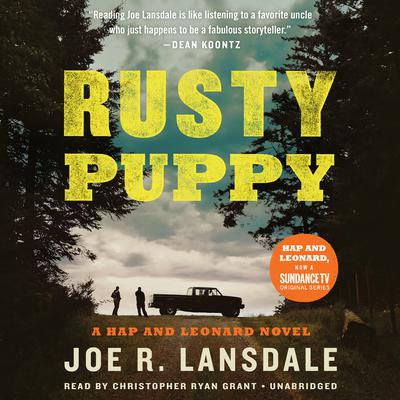 The Hap and Leonard Series: Book 12

While Hap, a former 60s activist and self-proclaimed white trash rebel, is recovering from a life-threatening stab wound, Louise Elton comes into Hap and Leonard’s PI office to tell him that the police have killed her son, Jamar.

Months earlier, a bully cop pulled over and sexually harassed Jamar’s sister, Charm. The officer followed Charm over the course of the next couple of months, leading Jamar to videotape and take notes on the cop and his partner. The next thing Louise hears, Jamar got in a fight and is killed in the projects by local hoods. It doesn’t add up: he was a straight A student, destined for better things, until he began to ask too many questions about the racist police force.

Leonard, a tough black gay Vietnam vet and Republican, joins Hap in the investigation, and they stumble upon the racial divides that have shaped their Eastern Texas town. But if anyone can navigate these pitfalls and bring the killers to justice, it’s Hap and Leonard.

“Christopher Ryan Grant returns for his second outing as narrator of this series and does an excellent job emphasizing the strong friendship between ‘white-trash rebel’ Hap and gay, black Leonard. In addition, the humor and humanity prevalent in the story receive star treatment…And it can also be appreciated by those who haven’t experienced earlier titles.” —AudioFile
"[Lansdale] has a wonderfully warped way with words. In his hands, everyone can curse a blue streak and it comes out as profane poetry.” —Dallas Morning News
A unique mix of sly humor and horrific violence. Readers will laugh at some particularly profane smart-ass repartee and then want to cover their eyes a couple sentences later as the violence explodes. Another fine entry in a great series. —Booklist (starred review)
"Dark, moving . . . As always, Lansdale spins a wild, rollicking yarn, but behind all the mayhem is a heartfelt tale about friendship, brotherhood, loyalty, and family. Hap andLeonard are complicated, violent men, but they display a basic humanity and decency that carries this remarkable series along. —Publishers Weekly (starred review)
The pleasure of any Hap and Leonard mystery is the yin-yang of the two heroes: white/black, straight/gay, liberal/conservative, easygoing/hair-trigger temper. Without making any brotherhood speeches, the books are rough-hewn fables of tolerance in action. Part of the reason it all goes down without any kind of 'Kumbaya' ickiness is that Lansdale writes such good smart-ass repartee. . . . This puppy tells a waggly tale the reader is happy to follow down the roughest paths. —Kirkus Reviews
“Lansdale has a knack for murder, though thankfully he limits that talent to the fictional adventures of crime-fighting duo Hap and Leonard.” —Houston Press

Joe R. Lansdale is the author of nearly four dozen novels, including the Edgar Award–winning The Bottoms. He has received nine Bram Stoker Awards, the American Mystery Award, the British Fantasy Award, a Critics’ Choice Award, and the Grinzane Cavour Prize for Literature, among others. His novella Bubba Ho-Tep was adapted to film by Don Coscarelli.