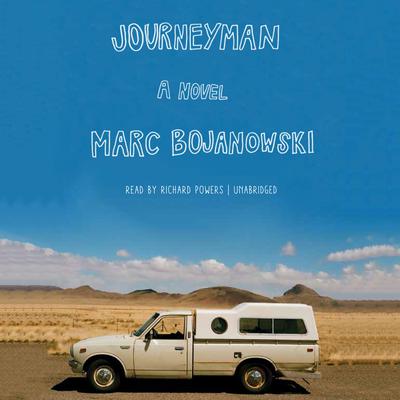 Nolan Jackson is a journeyman carpenter by trade and a wanderer by nature. And in 2007, while fellow Americans fight in the Iraq and Afghanistan wars, Nolan roams, traveling between jobs building tract homes across the West. Following a shocking workplace accident in Las Vegas, he uproots himself from the tentative relationships he has made and heads toward the ocean.

On his way he passes through his brother’s town where circumstances cost him his trailer and tools, forcing him to stay put. Unable to build houses, Nolan turns to building a meaningful life.

Questions about Western-film notions of masculinity are woven throughout the novel; from the damage to Nolan’s family by the Vietnam War in which his father fought, to the ubiquity and consequence of the wars in Iraq and Afghanistan, to slow unraveling of his brother’s marriage and mental state, to the mysterious rash of arson in their small town.

Ultimately, Journeyman is a timely, and tightly wound novel about dwelling, building, belonging, love, and men and brothers finding the value of a place to call home in the modern West.

“Bojanowski keeps it simple…His direct, unassuming style keeps the reader engaged in the ultimately optimistic story of Nolan’s attempt to overcome the contradictions in his life.” —Herald Scotland
“A rich but unrefined seam of allegorical meaningfulness [runs] through this pleasing tale.” —Irish Times
“Journeyman is a textured, deceptively linear novel that throws some curves and carries a trace of Cormac McCarthy.” —Booklist
“A bevy of well-rendered secondary characters brings humor and heart…Bojanowski’s novel is layered and thoughtful.” —Kirkus Reviews
“Angry, rootless…haunted by wars fought and unfought, these lost men have come to tell us something urgent and true about a world they no longer understand.” —Jon Raymond, author of Freebird

Marc Bojanowski graduated from the University of California at Berkeley and received his MFA in creative writing from the New School. His writing has appeared in The Literary Review, McSweeney’s, and Granta. His first novel, The Dog Fighter, was a finalist for the New York Public Library Young Lions Award.