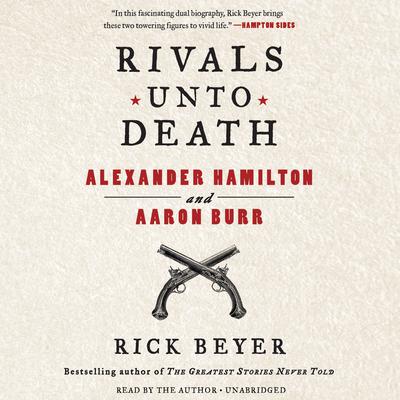 From the bestselling author of The Greatest Stories Never Told series comes this epic history of Alexander Hamilton and Aaron Burr’s illustrious and eccentric political careers and their fateful rivalry.

The famous duel between Alexander Hamilton and Aaron Burr was the culmination of a story three decades in the making. Rivals unto Death vividly traces their rivalry back to the earliest days of the American Revolution, when Hamilton and Burr—both brilliant, restless, and barely twenty years old—elbowed their way onto the staff of General George Washington. The fast-moving account traces their intricate tug-of war, uncovering surprising details that led to their deadly encounter through battlefields, courtrooms, bedrooms, and the wildest presidential election in history, counting down the years to their fateful rendezvous on the dueling ground.

This is politics made personal: shrill accusations, bruising collisions, and a parade of flesh and blood founders struggling—and often failing—to keep their tempers and jealousies in check. Smoldering in the background was a fundamental political divide that threatened to tear the new nation in two, and still persists to this day.

The Aaron Burr and Alexander Hamilton that leap out of these pages are passionate, engaging, and utterly human characters inextricably linked together as rivals unto the death.

“They were the best of enemies, two stalwart men of the national stage whose differences—personal and political—seemed to capture larger conflicts churning within our young republic. In this fascinating dual biography, Rick Beyer brings these two towering figures to vivid life on the page. In Beyer’s fine hands, the long feud between Burr and Hamilton seems part opera buffa, part Greek tragedy. As the pages keep turning, we feel ourselves pulled along a collision course—one that still has powerful resonance today.” —Hampton Sides, New York Times bestselling author
“This is good history—a work that both entertains and informs…As narrator, Beyer knows his words and paces the story effectively as it leads inexorably to its tragic end. His voice is friendly and familiar—as if a friend were reading you his favorite sections.” —AudioFile

Rick Beyer is the bestselling author of the Greatest Stories Never Told series as well as the coauthor with Elizabeth Sayles of The Ghost Army of World War II. He has also produced history documentaries for PBS, the History Channel, A&E, National Geographic, and the Smithsonian, among other television networks.