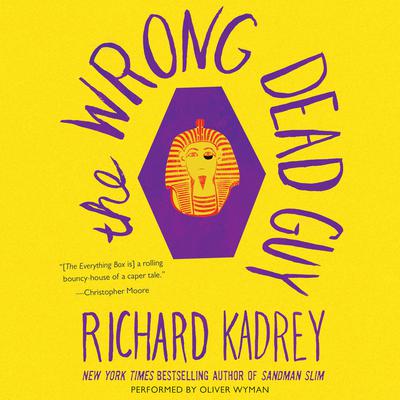 The Another Coop Heist Series: Book 2

In this fast paced sequel to The Everything Box—the second entry in New York Times bestselling author Richard Kadrey’s comedic supernatural series—chaos ensues when Coop and the team at DOPS steal a not-quite-dead and very lovesick ancient Egyptian mummy wielding some terrifying magic.

Coop, a master thief sort of gone legit, saved the world from an ancient doomsday device—heroism that earned him a gig working for the Department of Peculiar Science, a fearsome top secret government agency that polices the odd and strange. Now Woolrich, Coop’s boss at the DOPS, has Coop breaking into a traveling antiquities show to steal a sarcophagus containing the mummy of a powerful Egyptian wizard named Harkhuf. With the help of his pals Morty, Giselle, and a professor that’s half-cat, half-robotic octopus, Coop pulls off the heist without a hitch.

It’s not Coop’s fault that when DOPS opened the sarcophagus they didn’t find the mummy they were expecting. Well, it was the right mummy, but it wasn’t exactly dead—and now it’s escaped, using a type of magic the organization hasn’t encountered before. Being a boss, Woolrich blames his underling for the screw up and wants Coop to find the missing Harkhuf and make it right, pronto.

Digging into Harkhuf’s history, Coop thinks the mummy is hunting for an ancient magical manuscript that will help him bring his old lover back to life.

Which wouldn’t be so bad if she wasn’t a warrior sorceress hell-bent on conquering the world with her undead armies.

Coop would very much like to run from the oncoming chaos. It’s one thing to steal a mummy, but another to have to deal with head-hunting bureaucrats, down-on-their luck fortune tellers, undead mailroom clerks, and a rather unimpressed elephant. Unfortunately, there’s nowhere to run. If he wants the madness to stop, he’s going to have to suck it up and play hero one more time. But if Coop manages to save the world AGAIN, he’s definitely going to want a lot of answers. And a raise.

“Magic is the broth bringing all manner of delicious ingredients together in this wonderful stew of a story. This unusual urban fantasy is a delight.” —Publishers Weekly on The Everything Box

Richard Kadrey is the New York Times bestselling author of the Sandman Slim supernatural noir books. Sandman Slim was included in Amazon’s “100 Science Fiction & Fantasy Books to Read in a Lifetime” and is in development as a feature film. Some of his other books include The Wrong Dead Guy, The Everything Box, Metrophage, and Butcher Bird. He also writes the Vertigo comic Lucifer.