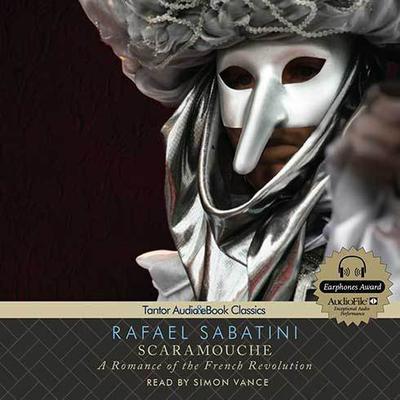 Scaramouche: A Romance of the French Revolution

The passionate Andre-Louis Moreau makes an unexpected entrance into the French Revolution when he vows to avenge his best friend's death. His target: Monsieur de La Tour d'Azyr, the aristocratic villain who killed his friend. Andre-Louis rallies the underclass to join him in his mission against the supreme power of the nobility. Soon the rebel leader must go underground, disguising himself as "Scaramouche" in a traveling group of actors. In the midst of his swashbuckling adventures and his country's revolution, he discovers the secret of his own identity.

All in all, this 'sheer knight-errantcy' is a marvelous entertainment. —Kirkus

Rafael Sabatini (1875–1950) was the son of two opera singers. Schooled in England and Switzerland, he would learn many languages. His first job was as a translator, and he would later translate for British Intelligence during World War I. He began writing historical romances for fun, and after publishing his first story in the mid 1890s, produced a new book every year for the next twenty five years.