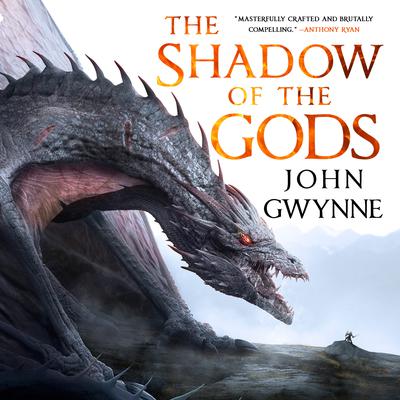 The Shadow of the Gods

From acclaimed fantasy author John Gwynne comes the first in the Bloodsworn trilogy, an epic of wild lands and wilder magic, where not all monsters fight with tooth and claw...and the treasures of the gods come at a price.

This is the age of storm and murder.

After the old gods warred and drove themselves to extinction, the cataclysm of their fall shattered the land of Vigrio.

Now, power-hungry jarls carve out petty kingdoms, and monsters stalk the shadow-haunted woods and mountains. A world where the bones of the dead gods still hold great power, promising fame and fortune for those brave - or desperate - enough to seek them out.

As whispers of war echo over the plains and across the fjords, fate follows the footsteps of three people: a huntress searching for her missing son, a jarl's daughter who has rejected privilege in pursuit of battle fame, and a thrall who has cast off his chains and now fights alongside the famed mercenaries known as the Bloodsworn.

All three will shape the fate of the world, as it once more teeters on the edge of chaos.

For more from John Gwynne, check out:

Of Blood and Bone

A Time of Dread

A Time of Blood

A Time of Courage

The Faithful and the Fallen

John Gwynne studied and lectured at Brighton University. He’s been in a rock ‘n’ roll band, playing the double bass, traveled the USA, and lived in Canada for a time. He is married with four children and lives in Eastbourne, running a small family business rejuvenating vintage furniture. Malice is his debut novel.