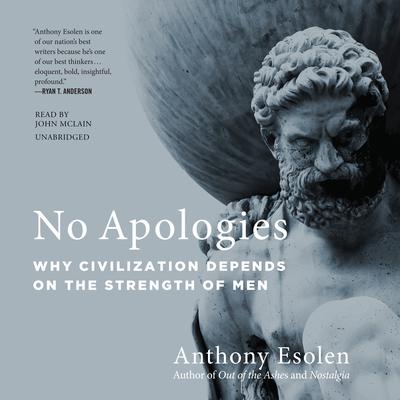 No Apologies: Why Civilization Depends on the Strength of Men

No more apologies for being a man! Bestselling social commentator Anthony Esolen draws on timeless wisdom to defend the masculine virtues of strength, drive, ambition, and determination in building and upholding civilization itself.

It’s time to end the apology tour for traditional masculinity. A generation of young men and boys are being raised in self-loathing, taught that the core of their identity as men is not only abhorrent, but the fountainhead of humanity’s ills.

In No Apologies, veteran author and professor Anthony Esolen issues a powerful defense of the virtues of masculine strength. From the thankless brute force that erected buildings, paved roads, and cleared ground, to the boundless energy of youth that compelled centuries of global exploration, to the father’s embodied authority as protector, director, and exemplar of law and justice, Esolen shows how civilization has rested upon the strength of men.

Wizened, accessible, and powerfully articulated, Esolen draws on two millennia of historical thought, citing giants like Plato, Augustine, Aquinas, Twain, Solzhenitsyn, and others in a vigorous and timely defense of the masculine ethos.

Anthony Esolen is a contributing editor at Crisis magazine and a professor and writer-in-residence at Magdalen College of Liberal Arts. The author of multiple books including Out of the Ashes: Rebuilding American Culture, Nostalgia, and The Politically Incorrect Guide to Western Civilization, Esolen’s commentary has appeared in such publications as the Wall Street Journal, The Claremont Review of Books, First Things, The Catholic Thing, and numerous others.