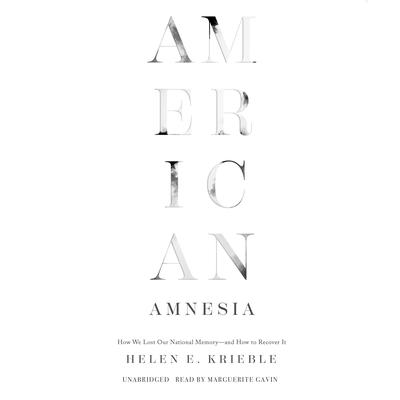 American Amnesia: How We Lost Our National Memory―and How to Recover It

People are who they are because of what they have been through, where they came from, who they learned from, and all the things that have happened to them. The same is true not just for individuals, but also for families, communities, and nations. America, too, has its own unique character, also formed by its memories, history, things it has been through, and what it has learned.

If people, communities, or even nations lose their memory, they lose their character. That is why cultures throughout the world work at maintaining their identity and passing traditions along to future generations. But what if a nation purposely decides it no longer wants to remember its history? What if a country imposes amnesia on itself?

Helen Krieble argues persuasively that this is precisely what has happened to America. It has lost the memory of its own founding principles, and the sacrifices made over the past 250 years to preserve them. The nation is losing its character. She writes that America cannot be preserved as “the last best hope of Earth” if its own people no longer understand why that is true and are no longer willing to do what it takes to preserve it.

“The duties of citizenship are vitally important,” Krieble writes, “but they are not complicated. It is our duty, as the owners, to defend our freedom against all threats, and to pass it along to future generations undiminished.”

Americans are failing in that duty, but Krieble says there is still time to cure our national amnesia. It begins with rebuilding our understanding of, and commitment to, those founding principles, regaining our national memory.

Helen E. Krieble (1943–2021) was raised in Connecticut, educated at Harvard-Radcliffe and the University of Pennsylvania, was an assistant professor at Hartford College for Women, and a regent at the University of Hartford. She served on numerous boards and commissions, including the Vernon K. Krieble Foundation, which she founded.

She was active in a bewildering array of non-profit organizations, receiving dozens of awards for supporting free enterprise and entrepreneurship. But it was as an innovator of ideas on important issues that she became most highly regarded. She was covered by Fox News, CNBC, the Wall Street Journal, Christian Science Monitor, Financial Times, Roll Call, The Hill, National Journal, American Spectator, Human Events, Congressional Quarterly, and dozens of daily papers and radio shows.

Helen’s speeches, writings, and radio broadcasts on the duties of American citizenship earned respect and admiration across the country. She is remembered as one of the most energetic and feisty leaders of the non-profit sector, admired by leaders across the country.